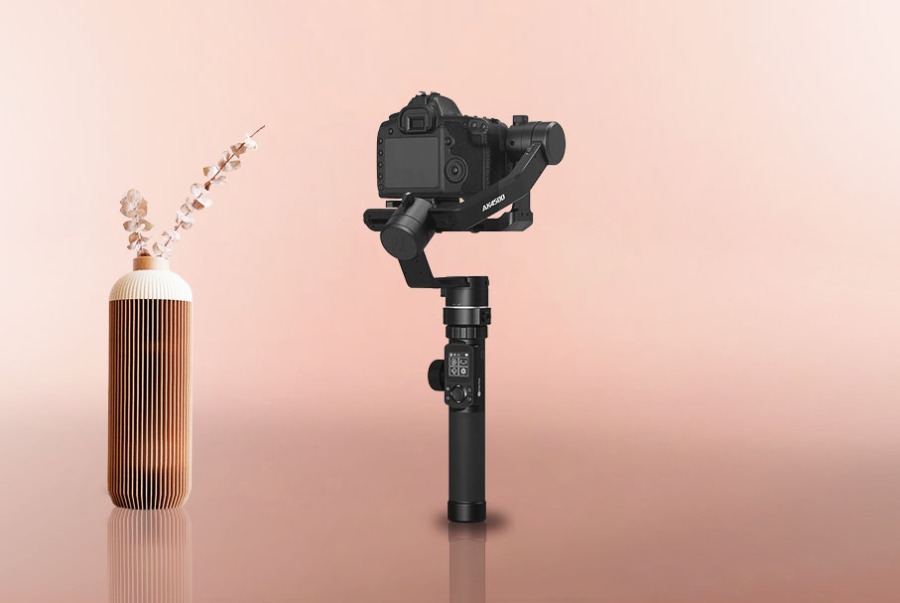 If you are into making films, first of all, the camera itself is the most important part, and the case we have here is the Blackmagic Design Pocket Cinema Camera 4K.

While BMPCC 4k promises to bring great content to the table, it also needs a partner to help it out.

And that’s none other than a gimbal.

A gimbal will give freedom to rebalancing and will ensure a steadier capture for your Blackmagic camera. This is also a big and bulky camera, meaning that besides helping with stabilizing, it will also help as a life-saving component to avoid the heavyweight.

If you are struggling to pick a gimbal for your BMPCC 4k, you just landed in the right place. In this guide you will be greeted by 5 picks and a Buying Guide, in the end, to make your gimbal hunting easier. 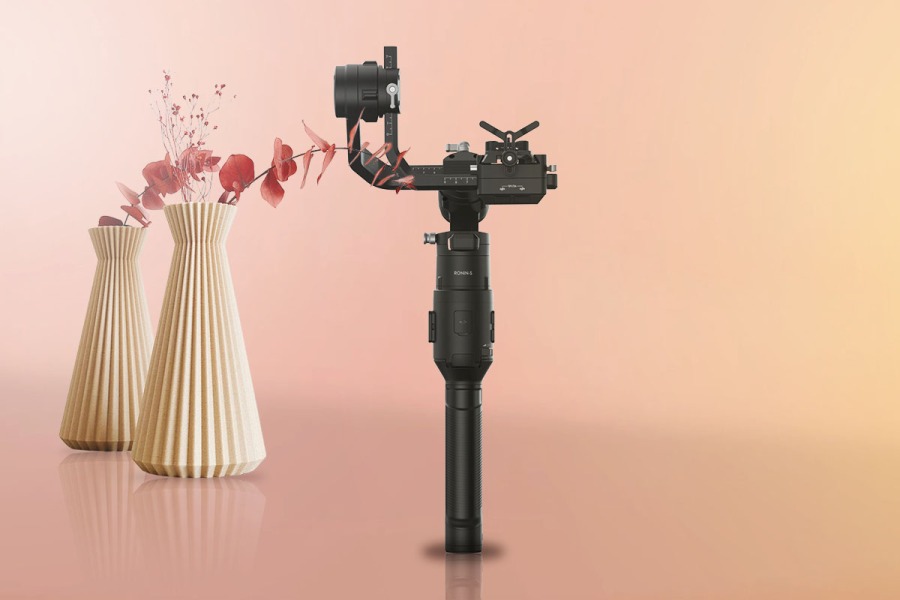 Start the list right away with a pick from DJI.

No, drones are not the only thing they know how to make, they made a name for themselv even in the gimbal industry.

As soon as you put the Ronin-S out of the box, you notice the high-level craftsmanship from DJI. It feels solid and well built while having ergonomic grips on the handle for easy use. The metal finish is just wonderful.

It has a weight of 1.8kg which is quite nice compared to some gimbals from the competition and the extensions are covered in a rubber-textured material for a better grip.

It sports really strong Motors that do a great job of stabilizing your BMPCC 4k. The whole control system was created to ensure that both professionals and entry-level photographers can have it easy when using the gimbal, so they won’t have to waste time on trying to figure it how it works,instead they just jump into the action.

To feed your creativity, Ronin-S offers some nifty capturing features like Panorama, Timelapse, Motionlapse, and Tracking. All the features mentioned can be accessed through the App/Software that is available for both iOS and Android.

It is driven by a 2400 mAh built-in battery that promises 12 hours of stamina. 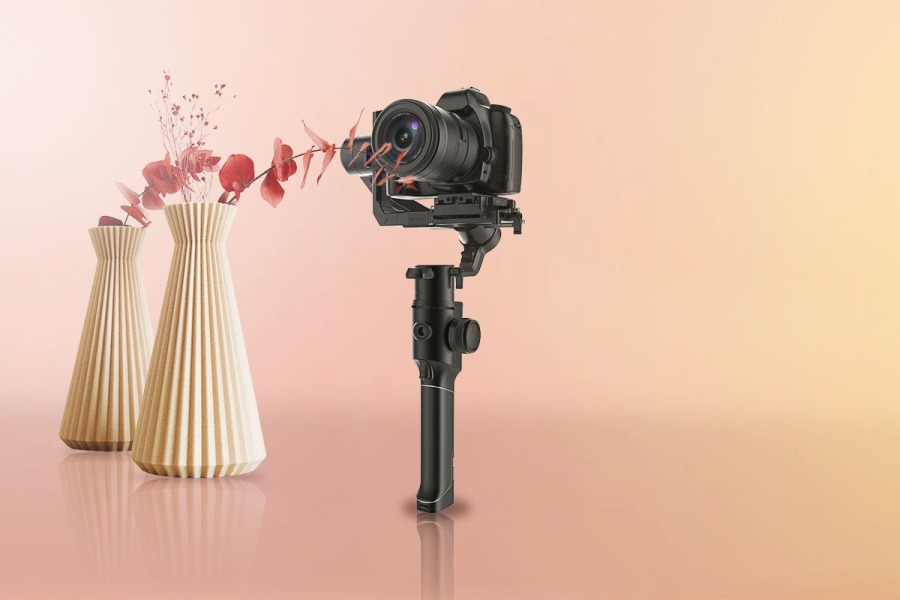 Next, we have an option from Moza, which is considered one of the main players in the gimbal industry. We have the Moza Air 2, the debutant or say successor of the known Moza Air.

Being an upgrade to its brother, Air 2 is here to cover what his predecessor couldn’t.

Moza Air 2, is a robust and heavy gimbal that was designed with heavy set-ups in mind, which is the case with our BlackMagic pocket camera.

It measures 5.12 x 3.94 x 3.15 inches and weighs 3.64 pounds. Not going to lie, a bit ironic for a device that is named “Air”. After long hours of working, you will notice the heavyweight in your hand; but as I mentioned it was made for heavy lenses and heavy cameras which is understandable.

Moza Air 2 is one “heavy lifter”, it has a weight capacity of 9.25lb (4.2 kg). This gives you the chance to mount any lens you desire on your BMPCC 4k; and no, the Air 2 won’t bother with the extra weight.

It comes with an OLED screen that is quite bright and easy to see even outdoors while the informations are displayed in a clean and basic way. What’s more, you can tell the gimbal how heavy the payload you’re going to use is, so it can determine the power usage on its own.

Fortunately, the battery life is on the bright side too; it is capable of lasting 16 hours while working continuously.

FeiyuTech is not part of the “big dogs”, meaning that they are underdogs to the known companies like DJI, Moza, and Zhiyun.

However, there’s nothing more satisfying when the underdog takes over and proves that it is not just an “underdog”.

The AK4500 is an incredibly well-built gimbal, even beyond its price point, it has 3 brushless motor that carries a 4kg max payload. The big capacity means that it can carry heavy cameras like the Canon C100, let alone the BMPCC 4k.

It also comes complete with everything that you need and there’s also the additional handle, that greatly contributes to extra steadiness while filming movements.

AK4500 sports a touch screen that gives you access to different modes like, action, customize, default, smooth. Just as the name implies they are the payload settings you will be picking based on what you need to record.

There’s also the option for an endless rotation mode, a 360-degree one, and the portrait mode for selfies or vloggers who record themselves.

As far as battery life goes, it is a great one that is capable of going through 10-12 hours of continuous work. 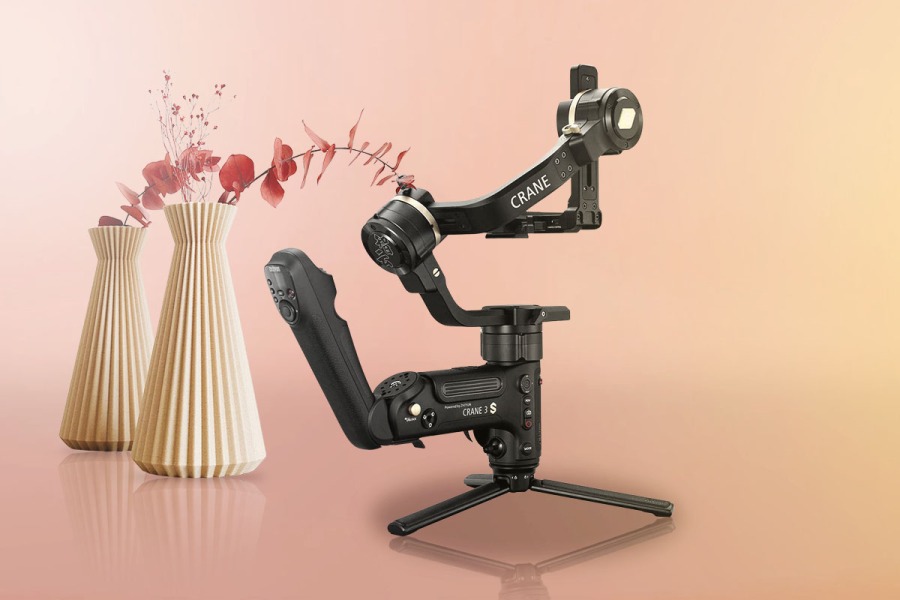 Second, on the list, we have, the Zhiyun Crane 3S. Zhiyun is a company that has been at the forefront of the gimbal industry, their Crane lineup is a fan-favorite among many videographers.

Another field that separates Zhiyun gimbals is their design. Zhiyun has a long history of being praised for the great built quality they offer.

You just can’t love the adjustable handle which quickly switches between traditional handheld and underslung modes and it does all that in a matter of seconds.

Design-wise, the Crane 3s is almost identical to its counterpart the Crane 3 Lab. However, Crane 3s being a newer model of its sibling, feels more polished.

Despite being made out of plastic mostly, it is one heavy boy. Nevertheless, it is the same built quality that we are used to seeing on Zhiyun products, for sure it will please most Zhiyun users.

It has an impressive increase in capacity compared to its brother the, Crane 3 Lab which could hold only 4.58kg. The Crane s won’t mind carrying up to 6.49 kg of payload.

As for battery life, it will last videographers an entire day without a problem, or even more than that, it has a whopping 18 hours of longevity. 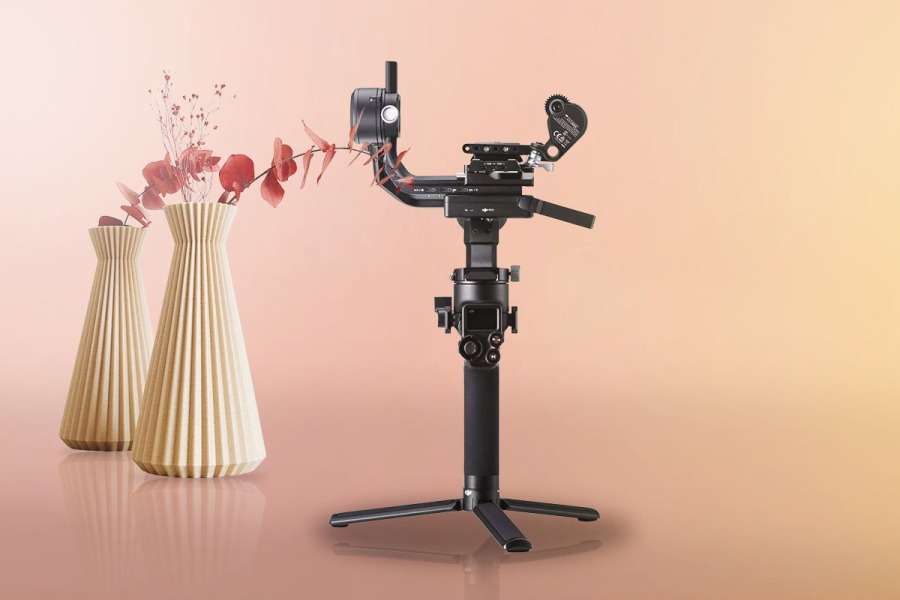 Once again DJI makes it on the list and yet again, it is here to tell us that they can also make “flying cameras”, this brand simply doesn’t limit itself to offering great things, for example, their action camera is another top choice that you can consider if you are into action cameras, DJI Osmo Action.

Anyway let’s get back to their gimbal now, the RSC 2 and we are getting straight to its major change or say key selling thing, the folding frame. Unlike traditional gimbals, RSC 2 can be folded and not solely for easy storage, but it allows you to get as low as to the ground, so you can shoot great macro shots in a comfortable fashion way, without having to bend.

Its OLED display must be another killing feature. RSC 2 sports a new 1-inch OLED panel that is a great addition to have on a gimbal. It clarifies the camera settings in a much easier way; there you can adjust the axis rates, change what the wheel does to the camera, calibrate the gimbal, and much more – yes, all that without having to go through your phone.

No worries, the Ronin app is still there, it is the same one as mentioned on our first pick from DJI, you will find all the general features that you find on the Ronin S.

Another unique thing would be the battery life, not only it is capable of lasting up to 14 hours but you can charge it using the built-in USB-C port.

How I Picked The Best Gimbal For BMPCC 4k: 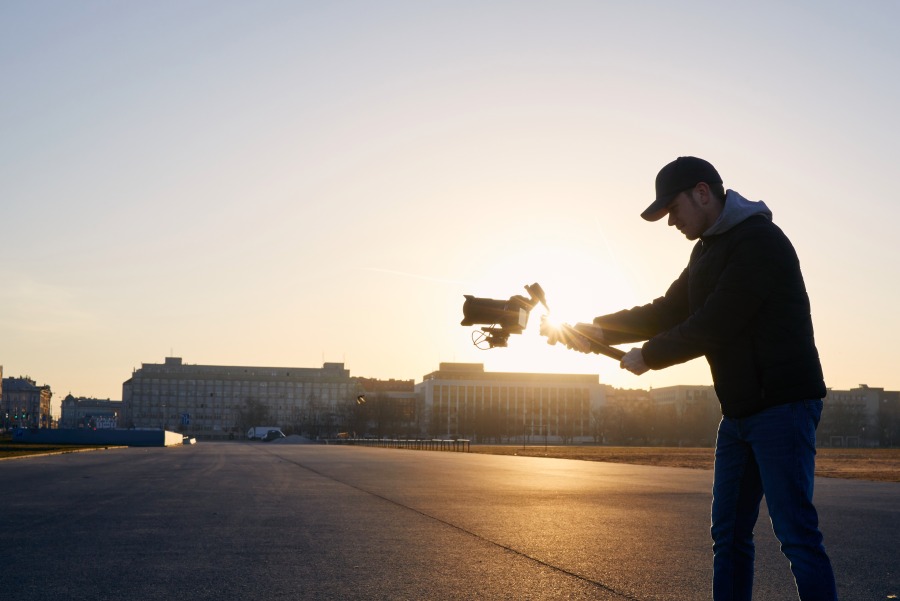 While this is a great budget camera to record your cinematic shots, it struggles in some fields. What’s cover those drawbacks by no doubt is a gimbal.

But you don’t want to jump in the market and buy the first gimbal that you spot, instead, you want to do your homework first.

You want to make sure that the gimbal you are buying is easy to fix or mount your camera on it and once you do that you can correct the balance in any direction you want.

If you fail to balance your BlackMagic camera, the shots will falter and the bad adjustments will be shown instead of being eliminated.

Simply put, a good quick release plate will have hard stop knobs and it will fully ensure the right mounting while eliminating all the hassle of rebalancing the camera every time.

The best handheld gimbal won’t come in lightweight, meaning that you will have to add extra strength in different methods to bring the best out of it

A lot of features will contribute to its stabilization but for a heavy-weight camera like the Blackmagic Design Pocket Cinema Camera 4K,

Make sure you opt for single-handed gimbals to dual options.

Yet another important factor you need to consider. A high-quality gimbal might even be a lifetime investment, or at least it will survive for years.

It should have some nifty features, be made out using the finest materials, and also contain a good battery that is replaceable.

The longevity of your gimbal or say battery life, plays a vital role also. Its lifetime depends on the feasibility of inserting the number of batteries and the power of each battery.

Basically, 4 batteries that have more than 5000mAh will last between 10 to 14 hours.

Price is the factor that we consider for everything we buy and not just for gimbals. A known brand and good quality gimbal will determine the price.

A cheap gimbal will cost you more in the long run and most likely on heavy setups it might even end up ruining your camera, so you don’t want that.

Be patient and spend on the right brand, that is known for producing good quality gimbals.

Q: What is a Gimbal?

A: A gimbal is basically a device that helps you in stabilizing the footage from your camera. Simply put it follows the movements of the camera to make sure that the captured footage doesn’t have any shakiness.

Q: What’s the difference between a Steadicam and a Gimbal?

A: They are pretty much the same, they do the same job, which is stabilizing the camera.

However, the major difference; is that the Gimbal is somewhat more electronic, has moving parts, requires batteries and a charger.

On the other hand, the Steadicam requires physical work to maneuver it around, balance it out.

Worth mentioning is that, while Steadicams have remained the same for years now, gimbals are changing day by day.

Q: What’s the difference between a 2 axis and 3 axis gimbal?

A: This is quite simple, a 2 axis gimbal will give your camera freedom to tilt up and down, while the 3 axis one will let it even tilt left and right as well.

Gimbals or even a tripod, are a must tool in order for your content to look more professional.

No matter how good of a photographer/videographer you are, handheld you will never be able to achieve the stabilization a gimbal has to offer.

The same saying goes even if the camera has built-in stabilization.

The best gimbal for bmpcc 4k will give you the chance to record smooth and steady cinematic shots, that people will doubt that they were taken from a pocket camera.

If you liked what you read so far and you need some extra tools or insight in general below you will be introduced to some other articles.

If you’re looking for a lens for your BMPCC, you can take a look at our lenses for BMPPC article.

If you need a budget camera to shoot cinematic videos you can check, the best budget cinema camera.

No worries Fujifilm users, I got you covered too, the best gimbal for Fuji XT3.

Until next time, enjoy!