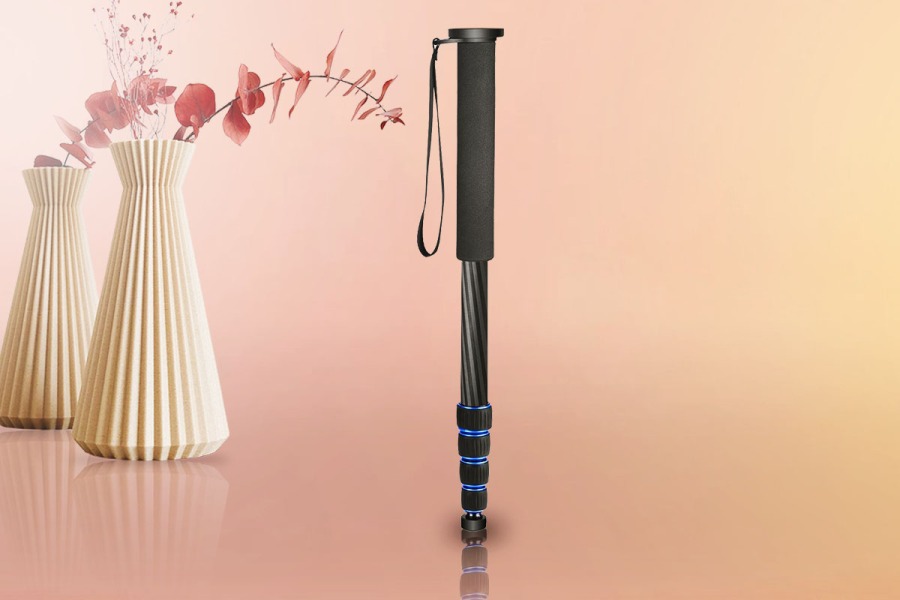 A monopod, hence the name, means one-legged support for any type of camera that you may already own! It is a very strong and sturdy accessory and besides being strong, it is an amazing help while in use.

Monopods are considered the most useful camera accessory for a photographer. As you know there is another choice for sturdiness and strength and it is a tripod. I’ve written many different articles regarding tripods and still, I think that being smaller in size, the monopods could be more useful.

Without further ado, I would like to directly go at to the reviews. 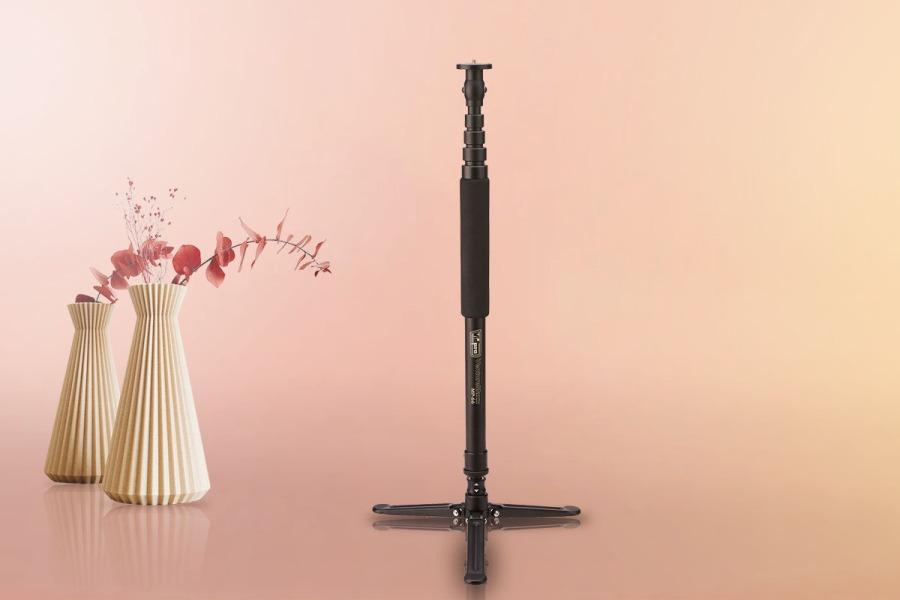 The Vidpro MP-66 is one of the greatest monopods ever made. It is an amazing professional monopod that is mostly used with action cameras.

This monopod is made of aluminum. It is a strong and sturdy monopod that can be used whenever and wherever you want. It has a tough build quality and it is fully resistant to scratches and can be easily used underwater. It measures 25.3 x 3.3 x 3.3 normally adjusted but it can also be extended up to 70 inches. Its weight is 2.85 pounds.

In order to mount your camera to this monopod, you should use the quick-release disc plate that is detachable. Once you put the camera on that plate, the only thing that is left out to do is to tighten it, so that it doesn’t move.

When you notice that the camera is stable in its place, to fully lock this monopod, you should use the “Air Lock” system. It is a strong locking system that keeps the monopod quite steady.

This monopod doesn’t have a wrist strap, however it has a shoulder strap which makes it easy to carry around.

This tripod has a wrist strap which makes it easy to carry around.

On the side of this monopod, you will find a bubble level which basically tells you if the balance of the monopod or the camera is right. 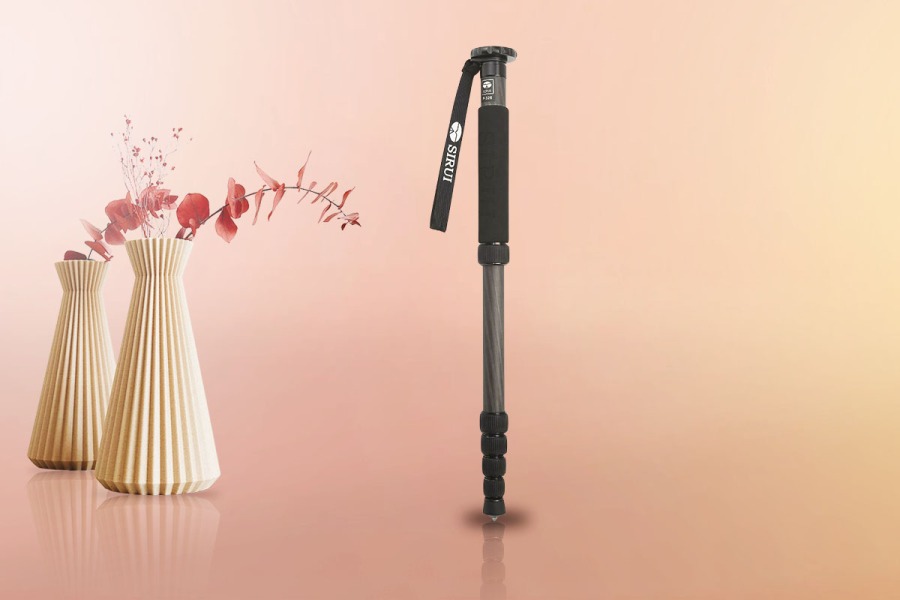 The Sirui P-326 is a monopod that is super strong and super stable at the same time. It is one of the best choices when it comes to wildlife photography, photographers of that field seem to love it.

Differing from the monopod that I already mentioned, the Sirui P-326 is made of carbon fiber material; it is the strongest material that can be used in monopods and tripods as well because it is very sturdy.

Even though it may sound a bit weird because of its strength, this monopod is a very lightweight one, weighing only 14.4 ounces. Its measurements on the other hand are 15.75 x 1.97 x 1.97 inches when it is folded, while when you extend it goes up to 60 inches.

The camera mounting is possible if you use the screw that is placed in the upper part of this monopod. It is a strong screw that keeps your camera tightened enough so that it doesn’t fall off even if you move a lot.

It has a twist lock that includes silicone with it, and the silicone makes the monopod non-slip. 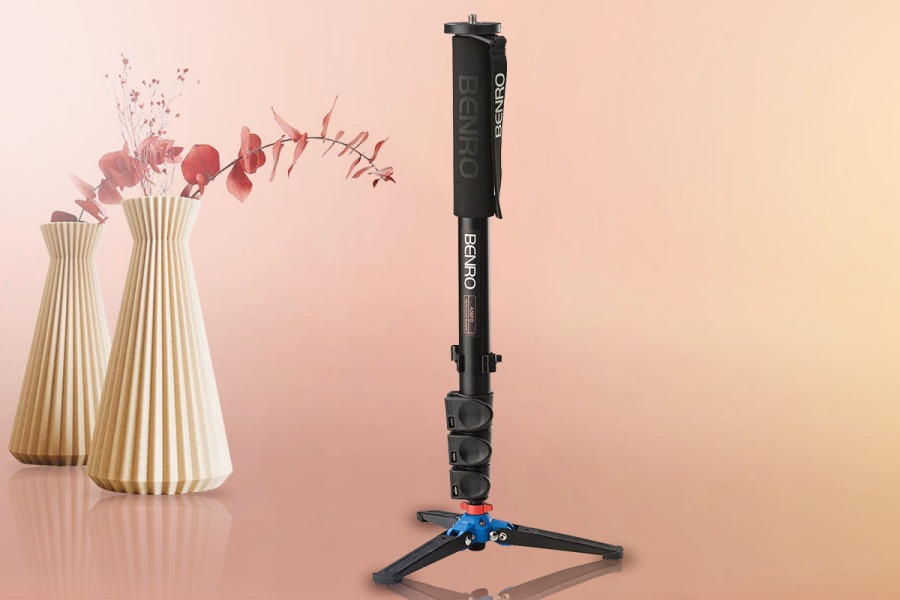 Some of you may already know that Benro is a brand that deals with any type of camera accessory. All the things that Benro launches are greatly built with many features. I chose this Benro monopod because t is one of the most famous ones.

Hence the name, this monopod is made of aluminum. Let me mention here that aluminum is one of the most usable materials all around the world, in order to make monopods and tripods as well.

As a whole, when fully extended the monopod achieves a maximum height of 61 inches while when folded or collapsed it measures 21.3 inches. When it comes to weight, it weighs about 2.1lbs and it supports up to 39.7lbs. Based on the size and weight this Benro monopod is a portable one.

Once you mount the camera on the top part of the monopod, on the quick-releasable plate, what you should do next is to tighten the flip locks that it owns and the monopod won’t move in any way.

At the bottom part, Benro owns three feet, which in a way make it look like it is a tripod, and those feet help the monopod stay stable. 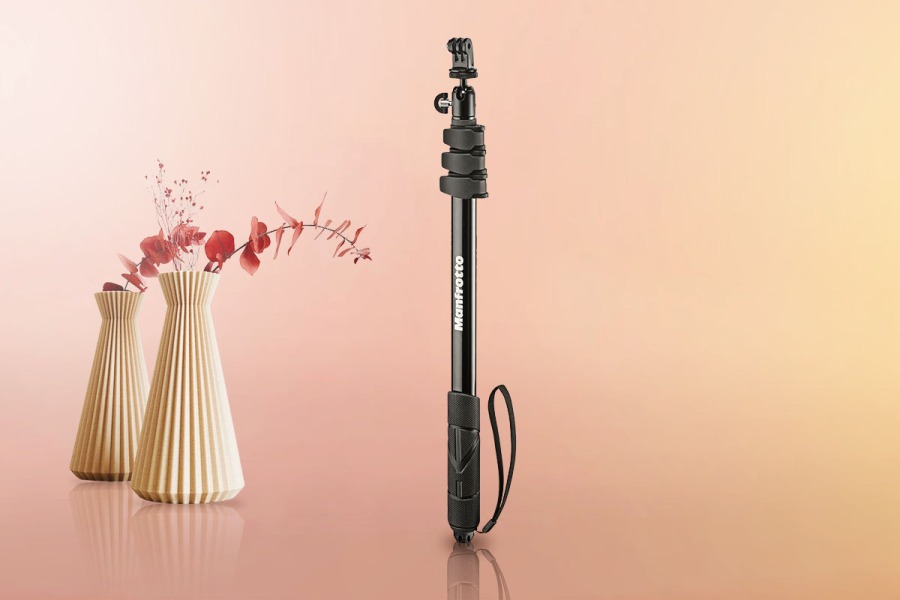 Moving on to the next monopod that I chose, appears the Manfrotto Compact Extreme. Just as the name suggests, this Manfrotto monopod is a very compact one based on its body, and it does an extremely good job while it is in use.

As mentioned, the compact part of its name stands for its body. It has an aluminum build, and by many photographers, it is considered as the monopod that could last for a super long time, it is a once-in-a-lifetime purchase.

Its whole body, when extended, goes up to 51.57 inches while if you choose to collapse it in the smallest way possible it goes down to 14.57 inches. As for its weight, the monopod weighs about 0.71 pounds and it is capable of handling a weight of 2.2 pounds.

I listed this monopod as the best 2-in-1 but why? I chose to list it like that because this compact monopod is not only used as a monopod but people seem to use it as a pole too!

The top part of this monopod owns a ball head. It is easy to mount the camera, and once it is mounted securely on the head, you will see that besides staying sturdily, it also allows you to move around omnidirectional (any way you want).

At its feet, this monopod has some rubber material; that makes the monopod non-slip on any surface.

Everybody has heard of Neewer, as a brand that does an amazing job when it comes to camera accessories in general. You may already know that Neewer has some amazing tripods, and it doesn’t fall behind when it comes to monopods as well.

Neewer decided to make this monopod out of carbon fiber. It is a very strong material, and on this monopod, it is brought with a combination of rubber which helps you while holding it on your hands, because it is a full non-slip material.

When it is at its normal height the monopod measures 18.9 inches and when you want to extend it, it goes up to 64.2 inches. Its weight on the other hand is 0.75 pounds while it can handle or support up to 22 pounds.

The mounting of your camera is the easiest thing to do! You should use the mounting plate which is fully adjustable, and it securely holds your camera in place, plus it holds the camera with any type of accessory that you may use with it.

It has anti-rotation twist locks which makes it easier to get a steadier shot. Steady shots are hard to capture when there are lots of moving parts, and that’s why i really loves the twist locks on this monopod.

At the feet of this monopod is added rubber as well and it is a non-slip material which makes the monopod stand perfectly in any place, outdoors or indoors, it doesn’t matter.

This is one of the cheaper monopods on this list, but this doesn’t mean that it isn’t a great performer. You get more than what you pay for with this monopod! 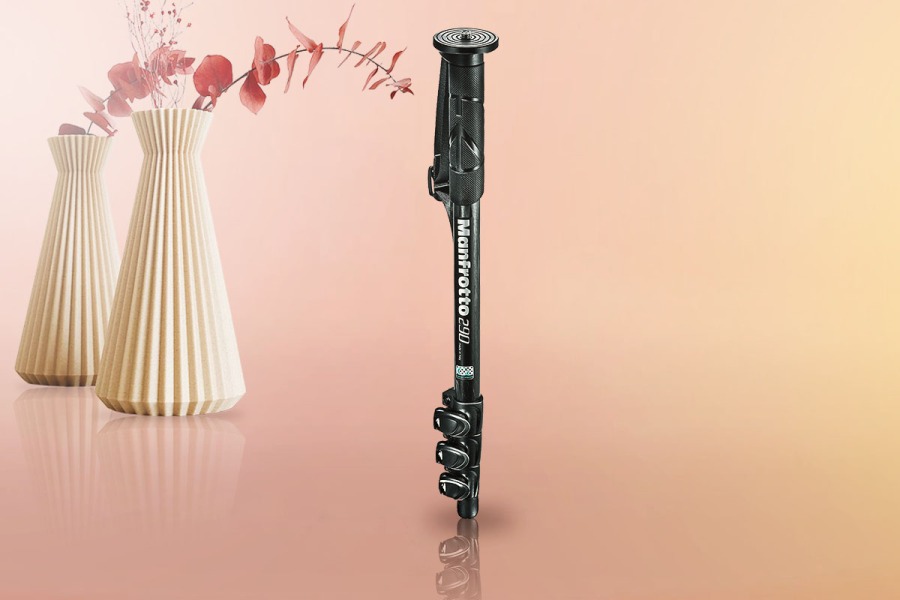 Last but not least, another Manfrotto monopod! As noticed, I have listed this monopod as the best overall! I chose to list it like that because this Manfrotto monopod has the greatest features that a monopod should own; strength and super stability.

Design-wise, this monopod owns carbon fiber as the material that it is made of. It is one of the strongest monopods that you can ever find, even though there are many different monopods in the market that you can choose from. That’s the reason that I listed this one as the best overall.

The Manfrotto 290 can be extended and collapsed as well. When it is fully extended it has a maximum height of 59.4 inches, and when collapsed in can go down to 19.29 inches. It is a fully portable monopod that can accompany you wherever you go. Its weight is 1.1 pounds and it can support up to 11 pounds.

The mounting of the camera is easy but still, you might want to consider any type of head for this tripod. Based on all the things mentioned above, the Manfrotto 290 is a very sturdy monopod and it strongly holds your camera anywhere you want to use it.

Again, at the feet, we deal with rubber as a non-slip material which makes the monopod stand in any place. 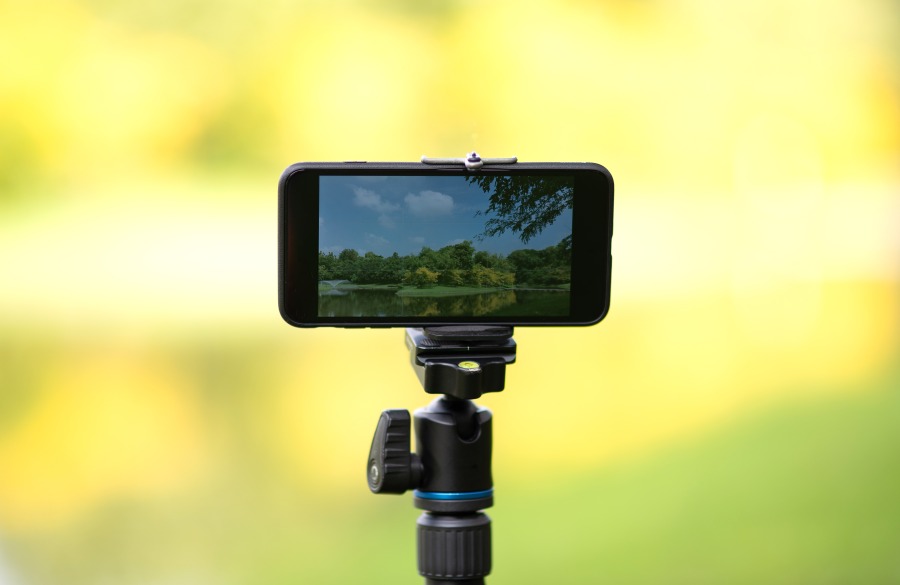 As mentioned at the beginning of this article a monopod is an accessory that supports a camera. That’s why the first thing that you should consider before buying a monopod should be its strength. If it is not strong enough, then everything else will be nonsense.

The material that is used in order to make monopods has a very important role, and it is linked with the strength which is mentioned above. As noticed, the monopods that I chose to tell you about include two materials mostly, aluminum and carbon fiber. It is based on what you want in this case, but still, you can choose between those two.

Stability is the most amazing, and the strongest weapon that monopods own. Well, that’s what we need on a monopod, to be stable enough, in order to be able to take pictures and record videos. Remember that stability is the most important thing. Some monopods offer extra features for extra stability, such as fixed rounded foot and textured rubber for uneven grounds.

In each and every monopod that I mentioned, I exactly added what are the measurements of it. You wouldn’t want a monopod that goes way above your head or goes down below at your feet. You won’t be able to control it that way. That’s why, before buying a monopod you should be careful with its height by knowing your height too.

If you consider traveling and taking your monopod with you, the weight that the monopod has is quite an important thing. Therefore, in the market, you can find different weights of monopods. I personally like to use lightweight monopods since they are portable friendly.

The price tag isn’t the most important thing only on monopods but it is important in anything that you are about to buy! However, monopods come all in different price tags and they have features that differ from one another. I would suggest you take a look at the price since you may deal with a very expensive monopod but still no features to be found.

Here we came at the end of this article! I tried to choose the most popular monopods that are found in the market nowadays, and I tried to choose from different brands. Based on that, I think that it is easier for you to choose one of them. However, as seen, all the monopods that I mentioned are quite sturdy and they would do the job pretty well, by holding your cameras sturdily.

I prefer monopods over tripods, because setting up tripod legs takes a lot of time and you have to deal with uneven ground and this makes it harder to get steady shots. Unlike tripod legs, monopod legs are easier to set-up.

I really hope that this article will help you choose a monopod that will work in the best way possible with your camera!

When I mentioned the last monopod of the article I said that you should use a monopod head, that’s why in order to choose the best one, you can have a look at the monopod heads that I wrote in order to make the job simpler for you.