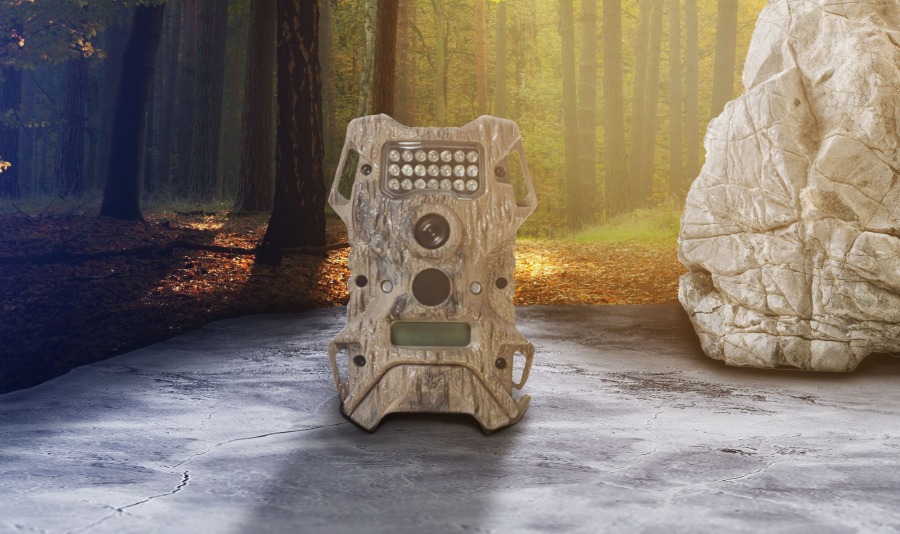 The best trail cameras made the life of big-hunters quite easy, and at the same time more enjoyable.

Trail cameras are also known as camera traps since they can be placed in wild environments and can capture beautiful shots of shy animals like deers, foxes, beavers, and more. Those animals are hard to track, let alone photograph, that’s when trail cameras kick in and provide you with a vision of them without having to scare them off.

Aside from that, they are also used as security cameras because they’re small, easy to use/mount, and hard to detect, hence the naming “camera traps”. Thanks to their camouflage design they blend in with nature and it’s hard to spot them even for humans, let alone for animals.

Since it is an outdoor camera it is made to withstand the elements, most of them include waterproofing and more durability traits. They work by using motion or heat detectors meaning they don’t have to be active 24/7, it starts capturing only when there’s something in the background, this at the same time increases the longevity of the battery life.

To make things easier for you guys and cut the chase, because I am well aware there is a huge number of trail cameras on market, I have rounded up what I think are the Best Trail Cameras under 50$.

The Top 6 Best Trail Cameras Under $50 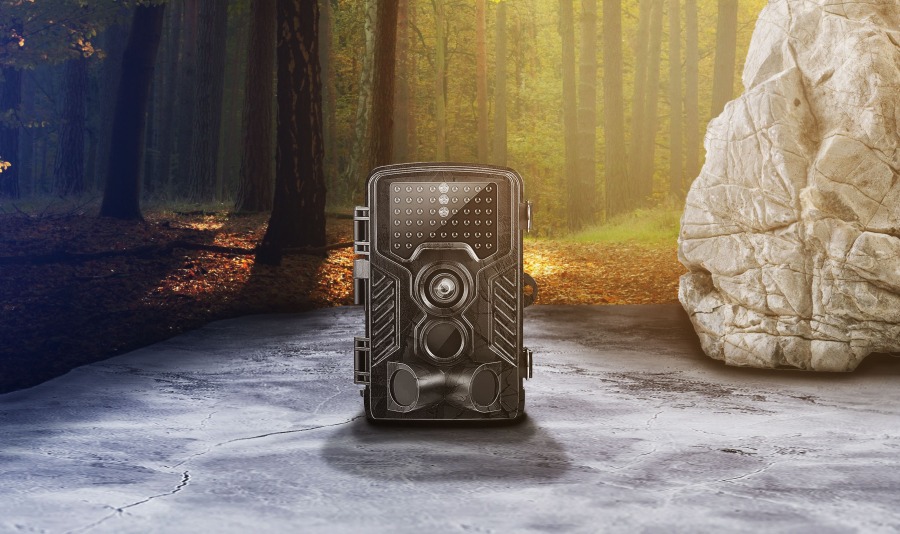 Hitting things off with a mini trail camera from Hawkray, the M2.

As the name implies it adopts a mini design, which comes even smaller than the palm of the hand. It measures 4.35 x 3.56 x 2.44 inches and weighs 1.06 pounds, making it quite easy to conceal. It comes fully in plastic, it has silver camouflage color that looks like stone and it has yellowish leaves painted on it, so it can be one with the nature.

Thanks to its silicone sealing ring it is rated IP65 waterproof. With the Ip65 waterproof body design, it means it won’t bother recording even in rainy seasons for a long time. The IP65 can protect the trail camera against water jets from any angle, but do not go so far as to submerge it.

It has a 20MP high-resolution sensor that captures high-quality details and provides clear pictures. Also, it is capable of recording in 1080P HD, whether it is day or night it won’t fail to provide splendid visuals.

The M2 also packs 22PCS non glow infrared LEDs that won’t disturb animals, and at the night they will look crystal clear. The sensitive IR motion sensor has a maximum detection range of 65ft, and its activation speed clocks at 0.2, promising not to miss any animal movement that occurs in front of HAWKRAY M2.

Feel free to use the M2 even as a surveillance camera or as a farm guard thanks to its quality and the ability to blend in almost anything. The packing will include a free 32GB micro SD card and 4AA Batteries. If that is not enough for you, i recommend you take a look at our list of the Best SD Cards For Trail Cameras and get yourself one with higher capacity. 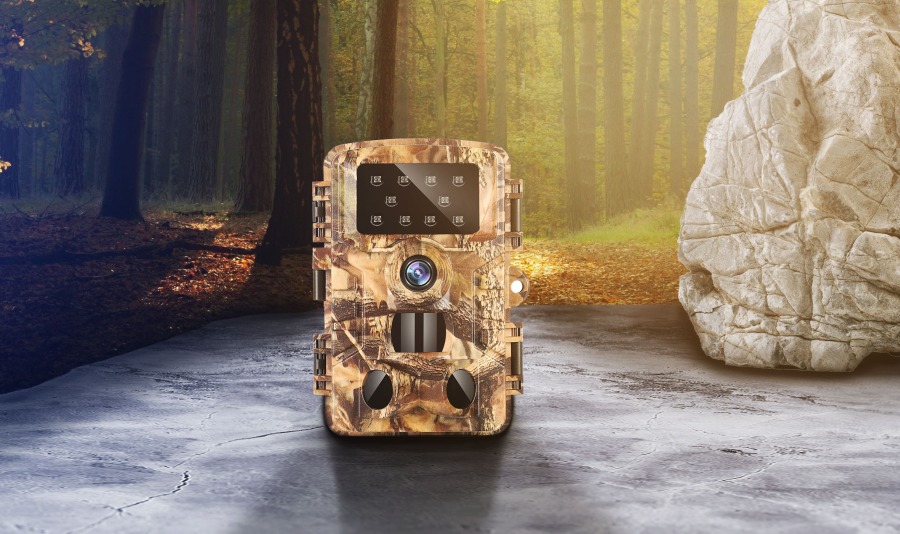 Moving forward the next option is from WISCOUNTING, promising us to bring great quality and value for a very cheap price.

It measures 3 x 5.5 x 4 inches and weighs 14.9 ounces. It comes in a rugged case that has a safari camouflage, implying that it is set out best for wild environments. It is rated IP66 waterproof, meaning it has resistance to rain and dust. Also, besides that, it is promising to work great even in harsher environments such as deserts, grasslands, and forests.

It supports 24 Mega-Pixels images and Full Hd 1080p video recording or if you simply want HD it records on 720p. This camera trap promises to capture every detail and record wildlife natural beauty through clear visuals.
The infrared sensors have a 120-degree motion detection range, allowing you to obtain a larger field of view.

While the Sensitive IR motion sensor has a maximum detection range of 65ft and a motion sensor that clocks at 0.2S. Yet again, it promises that won’t miss any animal on sight.

Sadly no micro sd card is included, but it supports from 1GB to 32GB and as for power it requires 8 AA Batteries.

The next option might not be as advanced as the previous mentions. But, it definitely deserved a spot on my list, since it comes from Wildgame Innovations, a company that has been around since 1990 and is well known among hunters and outdoor enthusiasts. Basically, you can’t go wrong with their products.

The main selling point of this trail camera is its Trubrak Camo color which is perfect for deer hunting since it can easily blend in with trees and get away undetected. Instead of having a basic mountain strap that we find on many trail cameras, Wildgame comes with 2 bungee cords for a stronger grip and to blend more easily.

The trail camera has a wide-angle of 16:9 aspect ratio that can capture images in 14 Mega-pixels and record in 720 HD Video. Yes I know, it would have been better if it offered the video recording in 1080P, but don’t worry, the pictures and videos will be there and decent.

As for the motion sensors, it has a detection range of up to 60 feet and a trigger speed of 0.75 seconds, yet again, way slower than the above options but it will do what it is set out to do.

It comes equipped with a low glow flash that utilizes 21 high-intensity infrared LEDs, giving it a 65-foot flash range and clear visuals in the nighttime.

It is capable of holding up to 32GB memory cards, and make sure you use a class 4 or higher rated one. For batteries, it uses 8 AA batteries, if they are high-quality batteries it is expected to last up to 1 year. 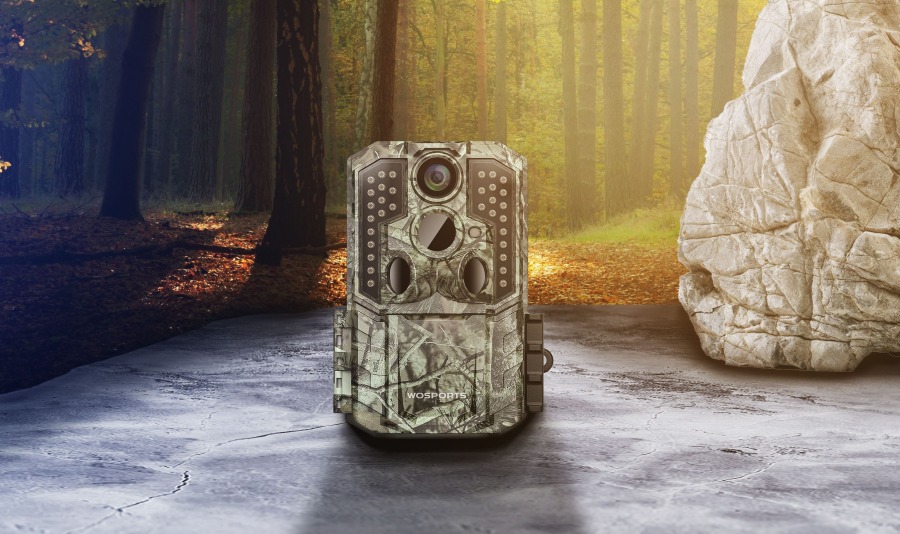 Let’s spice things up with something more advanced on the quality aspect.

The WOSPORTS Trail Camera G600 measures 5.7 x 4.3 x 3 inches, weighs 1.17 pounds, and it is as robust as they come. It comes in a dark green/greyish camo color and has an IP66 Waterproof rating, it shoots normally without sweat even on bad rainy and snow days. WOSPORTS advertise it as fearless in damp wood, that’s how confident they are in its durability.

This trap camera has a 120-degree wide-angle lens with 80 feet/24mm triggering distance, rewarding us with a wide-ranging view.

It sports a darn 30MP sensor with the capability to record in 1920p FHD ultra high resolution, it promises us vibrant and clear audible videos. Also, thanks to its 2.0 inch LCD color screen, you can easily see every detail of the things you just captured.
The motion night vision is designed with 32 PCS Infrared LED’s that provide an 80 feet flash range, which doesn’t spook the animals away.

It has a 0.2s lightning trigger time, meaning it captures every movement quickly! Also, the 3 continuous shots will bring more to the table.

It needs 8 AA batteries to fully work, and it can hold an SD card that is CLASS 4 or higher. The SD card that comes with the package is 32GB but the WOSPORTS G600 has a capacity of up to 256GB max. 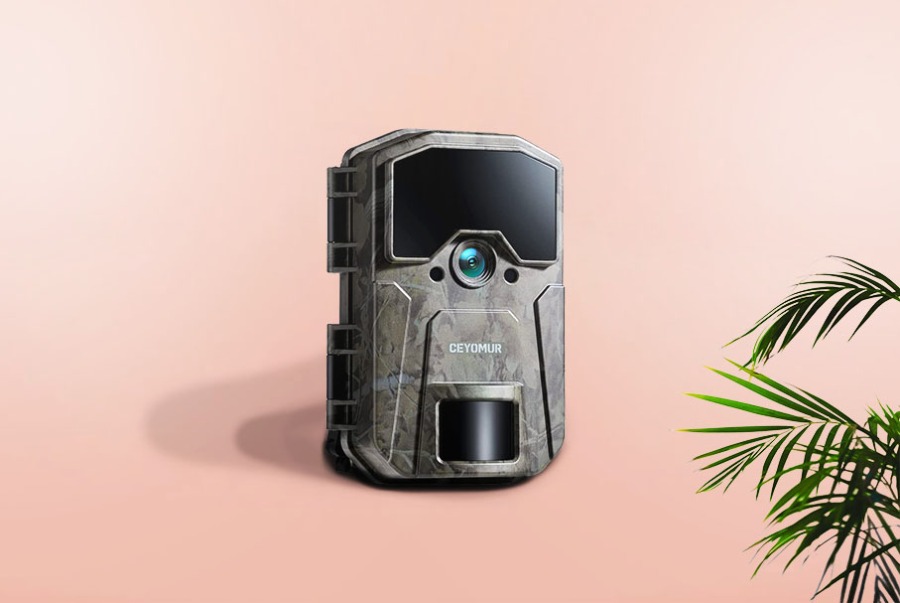 On the second spot, we have a really affordable trail camera from Ceyomur, a company which is specialized in researching and developing outdoor-image products.

CEYOMUR bills the CY50 as the most reliable partner to explore the wild. It is a small trail camera that comes in camo color, and it measures 5.71 x 4.01 x 2.79 inches and weighs 1.36 pounds. It has an IP66 waterproof rating. It is quite rugged, the IP66 means it is rated as dust-tight and is protected against heavy seas or powerful jets of water.

On its heart, it has an exceptional 20MP sensor that catches impressive photos, while it is capable of recording 1080P videos day and night.

The star of the show here is its night performance, it packs 36pcs 850nm Low Glow LEDs that reward with terrific black and white image. This superior infrared vision makes it easier to hunt and capture animals when it’s dark, without disturbing or spooking them away. On top of all that it has lightning-fast trigger speed and a snappy recovery time, making sure it won’t miss a single bit of movement. 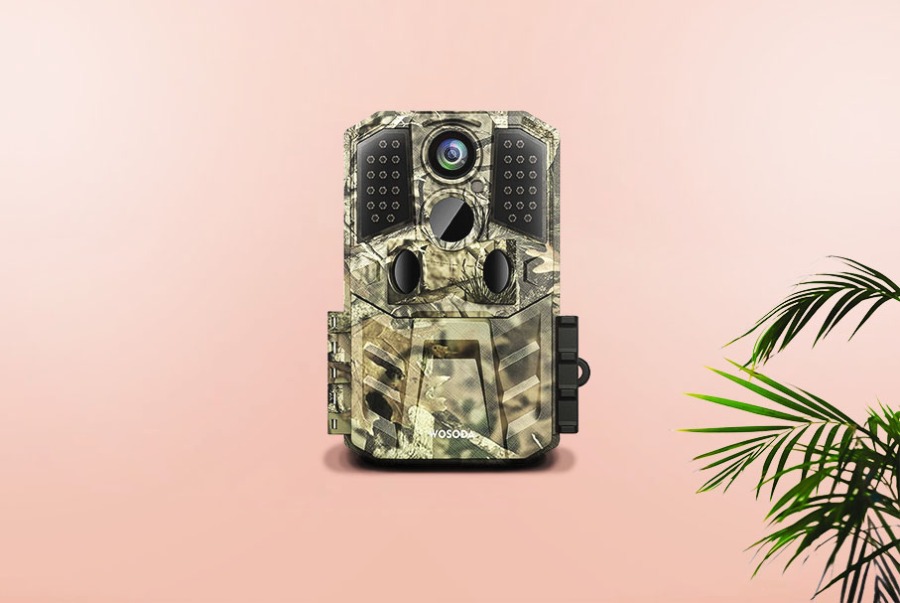 Lastly, introducing the Wosoda G300, a trail camera that brings more to the table than it should.

The G300 measures 5.7 x 4.3 x 3.2 inches and weighs 11 ounces. The color is really cool looking. It has a camouflage color that blends in really well with the woods or the whole forest in general. There should be no issues with someone noticing it. Also, the robust housing ensures you a long-lasting service from the G300.

It comes in a 24MP sensor and it supports 1920p HD ultra-high resolution video content. Wosoda vows to bring the best quality possible from a budget trail camera, during daytime or nighttime.

It comes with 3 Passive Infrared sensors that provide a 120-degree detecting range, while its trigger speed of 0.2 ensures fast and accurate capture of each detected motion.

What I liked the most about this trail camera was the Time-lapse function, it takes pictures automatically as per a set time interval, allowing you to perceive the process of plant growth, or the habits of animals when there are no humans around.
It uses 8 AA batteries and has the capacity to support up to 64GB SD cards.

Things that matter the most on a trail camera: 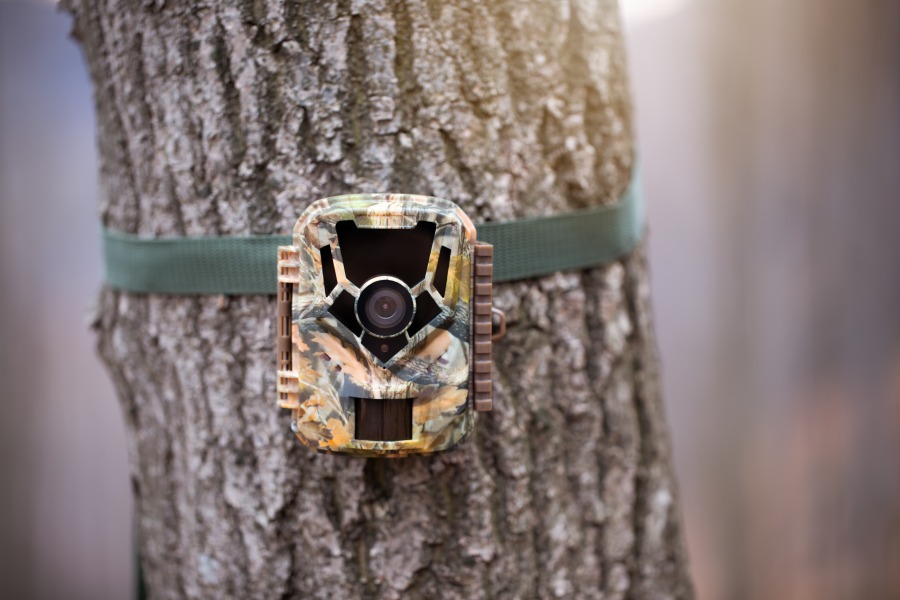 Some trail cameras take pictures, some record videos, some can do both and some are capable of recording and taking pictures at the same time
Since they are offered in an endless number of configurations, to make things easier for you guys, I’ll try to explain in short words in what you should pay attention the most when buying a trail camera.

I guess we are all familiar with the MP on a camera, basically, the higher the MP is on a camera the better the picture quality is. The quality of a trail camera is indeed a good thing to have, but since we are not here to do the professional shooting, a basic one will provide us visuals on wild animals just fine.

This is something more crucial, as the name implies it means how far the trail camera can detect movement and start capturing pictures/videos. You want to go for the wider angles since they are capable of catching more movement, faster.

How swift is the trail camera when detecting an animal? Self-explanatory, make sure you go after fast trigger speed so it captures even fast-moving animals like rabbits.

After just taking a picture, how fast can it recover to take another one?

The range between the trail camera and the animal, e:g short range means the object should be close at night so it gets the best picture out of it.

Something quite nice and bad at the same time, meaning the trail camera uses an infrared flash that cannot be seen by people or animals, so it won’t scare them away. But sadly in order for the no glow to work, it takes the pictures in black and white.

Connectivity will allow the trap cameras to connect to a TV or Computer/phone so you can view the pictures and videos of those beautiful wild animals.

Trail Cameras are quite fun and really inexpensive, I would even suggest them towards average joes, who live close to places that have animals around, watching how a wild animal reacts when there are no humans around was such a joy (for me at least). If you are looking for something that can help you film hunts, i recommend you take a look at our list of the best hunting video cameras under $500 instead.

A Farewell tip from me would be:

Make sure you always place the camera where’s food, water, and bedding.