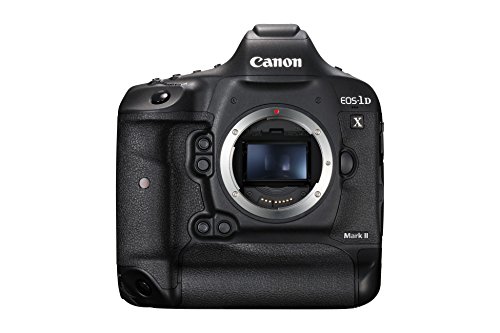 The Canon 1D X Mark II is a strong full-frame DSLR flagship camera that was released on the market in February 2016, and it quickly established itself as one of the best cameras in its price range, due to the fact that hundreds of photographers had an opportunity to shoot with it and have a better insight regarding its exceptionally good handling and capability!

In comparison to the 1D X Mark II, the Canon EOS 5D Mark IV was announced in the same year, on August 2016, but it has found itself in September 2016 as a professional, full-frame DSLR camera that surprised the market mainly because of the fact that it is a well-round and surely one of the most complete DSLR cameras that you may even shoot with!

But who wins? In order to find out, I’d suggest getting into action right away and find out what’s special about them and what can you expect from them in an eventual purchase!

The Canon 1D X Mark II feels and looks premium, starting from its matte-black, rounded body and all the way up to its tough magnesium build that is furtherly protected by a weather-sealing that makes this camera strong enough to withstand dust and splashes. This is superb if you ask me, since photographers will never face issues when shooting in different enviroments and weather conditions!

In addition, although this may not be the most compact and lightweight camera that you can find on the market, because it measures 6.6 x 6.2 x 3.3 ” (HWD), and weighs around 3.4 pounds without a lens, thanks to its integrated vertical shooting grip which is covered in a textured coating, the camera will always sit steadily in your hands and feel comfortable to shoot with!

If you view from the top, you can notice that controls are indeed numerous, but Canon did an excellent job in organizing them in an easy accessible manner.

Namely, the top-left side holds 3 dedicated buttons, a hot shoe that sits on the top-center, whereas, on the right, there’s an Information LCD screen that is accompanied by 4 dedicated which are set above the LCD screen, along with an M-Fn button and a shutter release button that sits on the usual position – at the grip.

On the rear, there are numerous buttons once again, and this can be either seen as a good or as a bad thing. Personally, I consider it as a good time because you will have multiple options to adjust the picture, and Canon has designed the control layout intuitively indeed!

On the top, between the viewfinder, there are 5 buttons of which two sit to the left, main LCD screen located below the viewfinder, another 5 buttons that sit in-between the main and the tertiary information LCD screen, while on the right-handed side, controls stretch from the top all the way down to the bottom, leaving you a place to position your fingers naturally on the grip.

Moreover, the electronic viewfinder is fairly big, has a pentaprism design, covers up to 100% of the field of view with a magnification ratio of 0.77x, and honestly, I think that you will love shooting through it because it is bright, clear, accurate and these attributes are always welcome since your eyesight will be undistracted as you’re locked onto a specific target!

If you’ve been thinking about the LCD display, well, although it is fixed, considering the fact that it is 3.2″, and that has a resolution of 1,620k-dots, I can easily say that the visuals you’ll be seeing are going to be superb, regardless if you’re previewing your photos/videos or shooting. Also, the screen is touch-sensitive, hence, you can easily navigate between menus because all of your gestures are going to be properly detected.

When it comes to the connection ports, the 1D X Mark II employs a mini-HDMI port, micro-USB 3.0 port, Ethernet port, microphone port, headphone port, PC sync, wired remote connector, and as you can see, they are indeed many! Unfortunately, Wi-Fi is only optional because it isn’t built into the camera, so, it has only an in-body GPS receiver.

Performance-wise, this model is equipped with an highly-accurate 61-point AF with 41 cross-type points, runs on Dual DIGIC 6+ image processors that will change the way you perceieve the capabilities of the cameras, because images and videos will look delightful, and let’s not forget its maximum continuous shooting rate of 16 fps, the ISO range of 100-51,200 which is expandable up to 409,600, and its 20MP image sensor that does a highly effective job in handling the noise at the upper ISO range.

Since I’ve mentioned the ISO range, I’d like to inform you that the 1D X Mark II outputs fascinating results at up to ISO 25600, but if I can choose, I’d go up between ISO 6400 – 12,800, because the more you increase the ISO sensitivity, the more blur is going to dominate.

RAW format images handle really good up to ISO 102,400, because although the noise is indeed present, images are still usable!

In the end, the 1D X Mark II is excellent for videos as well, because it can record 4K/1080p videos at 60 fps, and the footage will fully immerse you! Colors are incredibly accurate, whereas the detail level is breath-taking!

The Canon EOS 5D Mark IV is smaller and weighs less than the 1D X Mark II, or even better said it is moderate-sized if you consider the fact that I’m talking about a full-frame camera, because it measures 4.6 x 5.9 x 3.0″ (HWD), weighs around 1.8 pounds.

Moreover, this model looks elegant yet solid at the same time, because it is all-black finished, a color that fascinate me the most especially when it comes to camera, and solid, because it is made of a strong magnesium alloy that will a higher level of durability so that you can use it for years. What’s also cool is that Canon has implemented a weather-sealing as well as was the ca se with the 1D X Mark II, hence, both cameras receieve credits here because both of them let you have a huge freedom in terms of shooting! I use it as a monochrome camera personally.

I’d also like to mention that this camera employs an integrated, vertical shooting grip that is deep enough to offer you a natural hold of the camera on one side, while on the other, to offer you a convenient shooting because the comfort you receive in a return is indeed pleasing.

Speaking of the control layout, on the top plate, the left side houses a Mode dial with an On/Off switch, a hot shoe in the center, and in the same fashion is designed the top-right part of the body. There’s a large information LCD screen accompanied by 4 buttons that are located slightly above, as well as an M-Fn button that sits next to the shutter release button which is set on the grip.

If you take a look from the rear, on the left side, there is an array of buttons that stretch from the top to the bottom, a viewfinder that sits on the top-center, LCD display positioned below the viewfinder, and on the right-handed side, there are multiple controls that surround the small joystick that lets you have an easy navigation between menus.

For your information, the camera’s viewfinder is optical and has a pentaprism design that makes it be very bright and aside from this, it covers up to 100% of the frame, has a magnification rating of 0.71x, and by default, this means that your shooting experience will be unbelievably convenient!

In addition, the 3.2″ LCD screen has a resolution of 1,620k-dots, and same as its opponent, the EOS 5D Mark IV’s screen is touch-sensitive and although it is fixed, it outputs stunning visuals and is more than useful for switching through menus or for shooting. Once again, both cameras receive points for me in this stage and the result is a tie!

When it comes to the connection options, this particular model has a plethora of ports, such as a PC Sync port, microphone, headphone, single mini-HDMI port, micro-USB port, and dual memory card slots that support CF and SD/SDHC/SDXC media. But that’s not all! The EOS 5D Mark IV has also built-in support for Wi-Fi and GPS as its opponent, and so far, I’m sure that you can recognize that both cameras are superb!

In terms of the performance, this model combines a 30.4MP full-frame CMOS sensor, a 61-point AF system with 41 cross-focus points, ISO range of 100-32,000 which is expandable to 50-102,400, burst shooting speed of 7 fps and a DIGIC 6+ image processor that ensures low occurrences of noise and a top-notch image and video quality!

For your information, JPGs shot through ISO 800 look flawless, and you can’t notice the presence of blur even if you put a huge effort! Between ISO 1600-3200 you can notice a slight drop of quality, and even at ISO 6400 – 12,800 images are excellent!

Once you opt to shoot at higher ISO sensitivity levels, at ISO 25,600 – 32,000 there isn’t a huge difference between the quality of the images, but be sure that you will notice a noise. However, starting from ISO 51,200 and all the way up to 102,400 blur overtakes the image quality and I’d advise you to avoid this by all costs.

The story isn’t the same with RAW images because they look super-strong even at ISO 12,800, but clearly, at ISO 51,200 and beyond noise is getting prominent and it overtakes the detail.

Since we reached this far, I’m sure that you’ve already recognized the potential of both cameras, but hold on for a second, let’s reveal the areas where each camera outperforms the other, before you bring the final decision!

If you opt to shoot Portrait photography, keep in mind that both cameras are really good for this type of photography, however, the 5D Mark IV is slightly better, and the same can be said for Street photography.

The results of Spots photography go in favor for the Canon 1D X Mark II, although there isn’t a huge difference regarding the performance, whereas for Daily photography, both are excellent thanks to their environmental sealing, but the 5D Mark IV is more convenient to shoot with due to its weight.

The areas where the EOS 5D Mark IV outperforms its opponent is by having a built-in Wi-Fi/NFC, has 50% more pixels ( 30 vs 20MP), it is lighter, a slightly higher color depth and because it supports UHS memory cards.

Therefore, the result is very similar, and cost can be decisive here, whether you want to invest a huge amount of money for a more professional-looking and better-performing camera in terms of videos or not. Honestly, I’d go for the Canon EOS 5D Mark IV because the difference in terms of the performance isn’t huge, and this model is way more affordable.