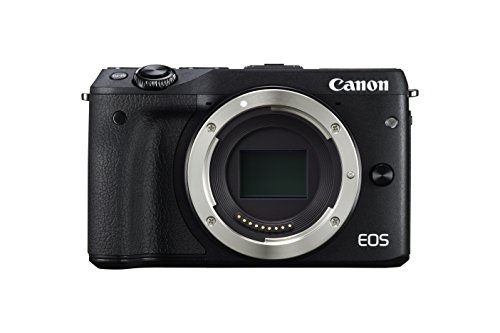 The Canon EOS M3 has expanded the borders of what does a compact, mirrorless camera really means. As a matter of fact, this camera is a successor of Canon’s first mirrorless camera, the EOS M, however, this time, this unit comes armed with numerous features and technologies that will ensure an unbelievably convenient experience to the one who shoots with this camera.

On the other hand, we have the Sony A6000 which was introduced to the market on 12 February 2014, so, photographers had an opportunity to taste its powerful performance a year before the Canon EOS M3. The A6000 same as the EOS M3 packs an APS-C sensor, and has many similarities starting from its look, and all th way up to the performance, hence, I’ve found them be very interesting options and worthy of being included in this article.

What makes them different, what each of them offers in practice, and which one is better, would be the aspects on which I’m going to pay attention, so, let’s get straight into business and reveal all of their advantages and disadvantages! 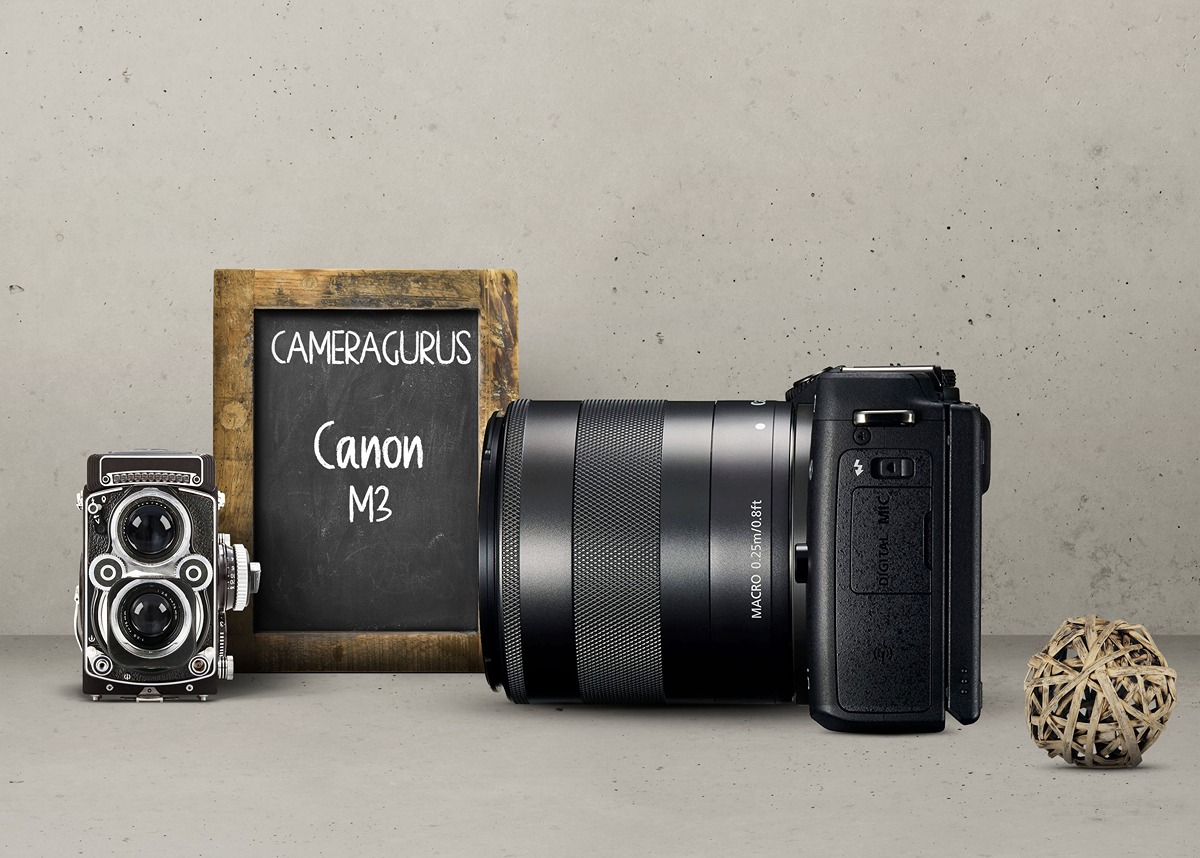 The Canon EOS M3 has a compact and lightweight, yet tough rounded body that is made of a magnesium alloy, polycarbonate resin and stainless steel materials, which are synonymous for durability, and since they are used throughout the crafting process with this camera, surely, this unit will maintain its strong look for a very long period of time.

If you take a look on the front and rear part of its body, you will notice that both the front grip and rear grips are deep and curved, hence, this make the camera comfortable to hold, which is a key for having enjoyable shooting sessions!

On the top plate, there is a hot shoe, a pop-up flash that sits to the left of the hot shoe along with a Power button, and Mode dial, whereas, on the right, you will find a Shutter release and an M-FN button, as well as a top control dial that surrounds them.

If you flip the unit over, you can notice that all of the controls are set on the right side, and they are kind of compressed which is normal considering the compactness of the camera, however, what’s cool is that they are well-organized with the intention to let you have a smooth access anytime you want.

Moreover, since there isn’t a viewfinder, Canon has put some efforts to include a strong, 3″ 1.04-million dot LCD touchscreen that distributes highly accurate colors aside from being bright enough to have your sight undistracted even if you’re shooting outdoors under a bright sunlight. What’s also cool is that this screen tilts as well, so, you can tilt it upwards for 180-degrees and 45-degrees downwards which is awesome, due to the fact that you will be able to shoot from various positions without any problems!

In terms of the connection options, the EOS M3 employs a 3.5mm stereo mini-jack, a mini-HDMI output, mini USB port, and a single memory card slot that supports SD/SDHC/SDXC memory cards. These are the physical connections, by the way, fortunately, the M3 has a built-in support for Wi-Fi and NFC which I absolutely favor, since the process of transferring all of your captured photos and recorded videos is going to be extremely smooth.

Performance-wise, the EOS M3 is powered by a DIGIC 6 image processor, has a 24.2MP APS-C sensor filter, a Hybrid CMOS AF III, built-in low-pass filter, a continuous shooting rate of 4.2 fps,and an ISO range that stretches from 100-12,800 which is expandable to 25,600!

For your informatiotn, the M3 is capable enough to capture both JPG and RAW images, and it also does a highly effective job in keeping the noise levels to the lowest points.

Namely, JPGs taken at ISO 3,200 have a minimal noise, and I can say that the overall quality is really good, while at ISO 1,600, details are fantastic and the noise is nearly non-existent!

When it comes to the video results, well, the EOS M3 captures 1920×1080 Full HD videos at 24/30 FPS in an MP4 format, and since you will have an opportunity to take advantage of an external microphone aside of its built-in stereo microphone, the footage will not only look delightful, but the audio quality will be fairly strong, so, aside from capturing photos, you can try yourself as a videographer as well any time you want! My only remark regarding this part is the lack of recording Full HD videos at 60 fps, since the only way you can achieve recording videos at 60fps would be recording HD videos.

Aesthetically speaking, the Sony A6000 features a stylish, black-finished compact body which although is made of composite material, feels solid and very comfortable to shoot with thanks to its 12.1 ounces of weight!

In addition, the grip is well-made, it is large and it is suitable for both, users who have small and large hands, and I’m sure that you will feel this once you start shooting with the camera.

For your information, the control layout is undoubtedly well-organized, and each button is strategically set to be accessed easily. For instance, the top plate is the place where most of them can be found, including a multi-interface shoe that lets you attach a microphone and a hot shoe, a mode dial, built-in flash as well as a control dial, shutter release button along with a customizable C1 button.

On the rear, the top-left corner is occupied by a 1,440k-dot electronic viewfinder that has an OLED design, and in comparison to the M3, the inclusion of a viewfinder makes the A6000 be a lot more convenient for shooting pictures, in my honest opinion.

Also on the top, there are multiple buttons and this pattern continuous to the right-handed side of the unit, because as was the case with the M3, they are somewhat compressed due to the compact side of the camera, but still, you won’t have issues accessing them in order to tailor the picture according to your preferences.

At the center, there is a tilting, 3″ 921k-dot LCD screen that can tilt upwards for 90-degrees, and downwards for about 45-degrees, but if we take this aside, the screen produces sharp visuals under normal occurrences of sunlight. In comparison to the M3, the A6000 lacks touch-sensitivity, and packs fewer dots. Clearly, at this point, the M3 offers more advantages.

Moving on, the connection options are composed of an HDMI port, mini-USB port, DC-In, single memory card slot that supports SD/SDHC/SDXC cards, along with a Wi-Fi and NFC support. Here, the result is a tie, because both cameras share the same functionalities.

Speaking of the performance, the A6000 is equipped with a BIONZ X image processor that will undoubtedly enhance the camera’s performance in terms of high-speed processing, producing lifelike details, strong tonal gradations and of course, a greater control over the noise levels throughout the ISO range. Additionally, this model houses a 24MP APS-C CMOS sensor, has a Hybrid AF that packs a 179-point focal-plane phase-detection and 25- contrast-detect points, a continuous shooting rate of 11 fps, and a native ISO range of 100-25,600 which is expandable to 51,200 for your ultimate user experience!

In practice, the A6000 captures JPEG and RAW images the same as the M3, but what’s cool is that at low ISO settings, this camera produces exceptionally strong imagery thanks to its sensor.

JPEG taken beyond ISO 1600 have minimal amount of noise, and I have to admit that the details are superb. The noise keeps non-existent or at the minimum levels even at ISO 6400, however, once you push over ISO 8000, the noise becomes more prominent and reaches its peak at the ISO 51,200 which should be definitely avoided.

Otherwise, RAW images have plenty of details and the color accuracy is mostly excellent even at the highest levels, because compressed JPEGs taken at high levels have some shadowing presence and lack the details of the RAW images. For instance, you won’t have problems at all even if you’re shooting from ISO 3200-4000 if you’re positioned in a poorly lit space.

Since we’ve reached this far, I think that now is the time where we have to decide who wins the race here, right? Before we do that, I would like to say that the comparison between these cameras was indeed interesting, and I really had a good time because both cameras are very similar to each other, and at the same time, they have some key aspects that makes them different.

For instance, the Canon EOS M3 proves itself as a better option with its screen who supports touch-sensitivity and has ( 1,040k-dot vs 922k-dot resolution), as well as the inclusion of a microphone port and the fact that the LCD screen is selfie-friendly.

To be more precise, the A6000 performs slightly better for portrait and street photography, whereas, at sports photography, the A6000 is a lot more better. For the last two, the result is very close, however, the A6000 beats the M3 by a minimal difference.

Overall, I’d go for the Sony A6000, and if you ever do that, I’m sure that you will not be disappointed!