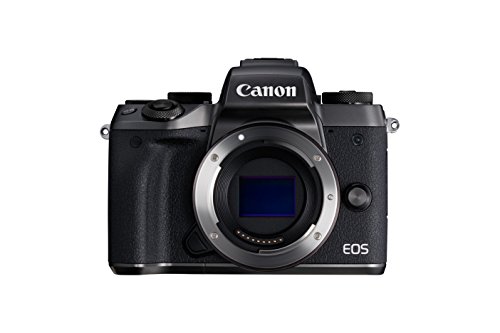 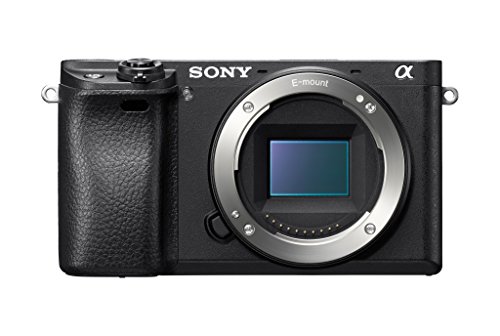 If you are a longtime follower of my website, then you probably know that I have made a comparison review about the Canon M50 vs the Sony a6300, but for this article, I decided to compare the Sony A6300 with the Canon M5, and no matter how similar they may be, I am still going to point out even the slightest differences and details.

Nowadays, you got plenty of camera options in the mass market, and it might be hard to choose the one that meets your requirements the most.

Many people before starting out with their photography career try out mirrorless cameras, while these cameras came second in line, and different from DSLRs, these don’t use a reflective mirror. These cameras are considered to be very compact, lightweight, and are more commonly used by vloggers, travelers, and people who carry their camera with them wherever they go.

However, that doesn’t necessarily mean that they don’t have good specs or performance, in fact, they are pretty high-end, especially these two cameras that I’m going to review today. But I’m not really going to spoil anything here since I’m going to review both cameras, and compare them in the meantime, whereas at the end of the article, I’ll be providing you with a comparison table where you’ll be able to see their most key features and specs and see which one outperforms the other in which aspect, so let’s start, shall we? 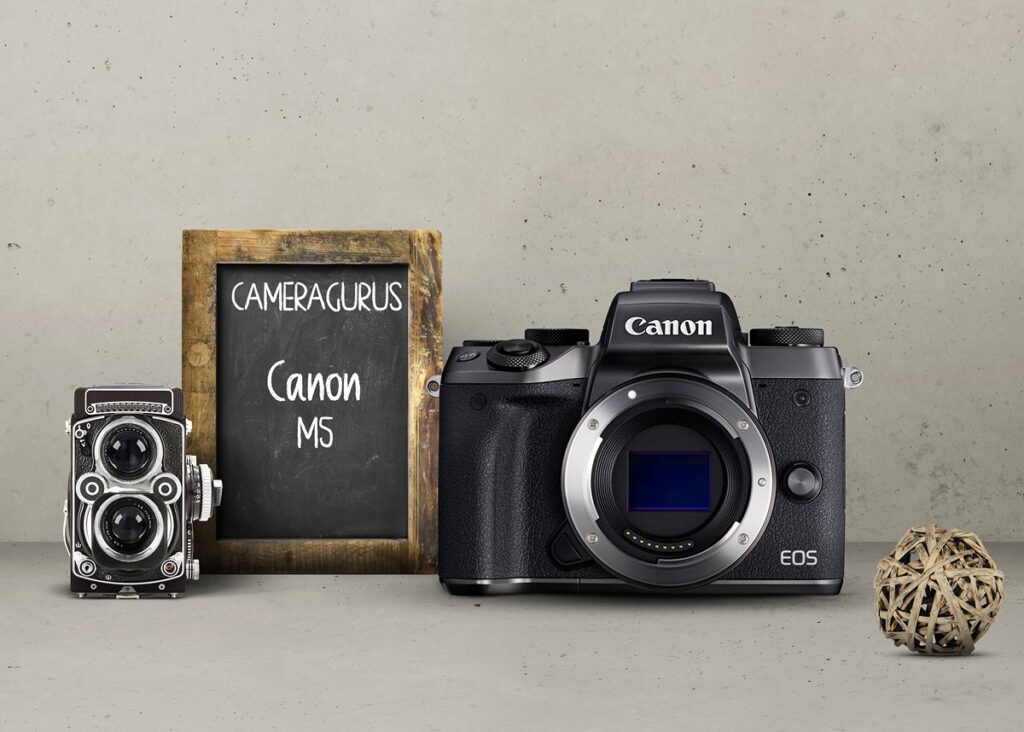 In my opinion, the Canon M5 is one of the best mirrorless cameras on the market, while it’s also Canon’s very best interchangeable lens camera, but it does come at a relatively high-price, considering it’s a mirrorless camera.

First, let’s start by pointing out a couple of interesting facts about the design, shall we?

Now I must say, the Canon m5 is not the mirrorless camera that you imagine, it boasts more of a mini-DSLR design rather than mirrorless, it’s not as compact as you would have thought due to the powerful specs and hardware that it packs within.

Despite its appearances, this particular camera features a polycarbonate chassis, it doesn’t have an aluminum alloy like the most, while its weight is approximately 427grams with battery and the card included. One of the cues that makes this camera looks more like a DSLR than a mirrorless is the deeply sculpted handgrip which delivers exceptional comfort while holding the camera, and the same textures that are used on the sides of a DSLR can also be found here, which do not only add extra points to the comfort area, but also give a great look to the overall aesthetics of the camera.

The button layout is pretty decent, everything is well balanced and well-thought-out, while the settings you select are immediately displayed in the viewfinder or on the rear screen, while the command dial serves as a tool to adjust the desired setting. From a practical perspective, everything works well, and it’s pretty easy to address and quickly adjust a wide array of settings, while the scroll wheel control has four-way controls which enable the camera for a decent customization, and let’s not forget the 3.2-inch tilt-angle touch-enabled touchscreen, which not only lets you optimize and change settings, navigate through the menu or scroll images, but the tilting design also allows you to shoot from different angles and viewing positions which is one of the most essential features for videographers.

Okay, enough said about the design, since we started mentioning features, let’s get more into the specifics now and see how this camera truly performs.

For starters, this particular camera has a 24.2-megapixel APS-C CMOS sensor which delivers a stunningly sharp image quality with plenty of detail and a colorfully enriched image. In addition, it runs the DIGIC 7 image processor which enhanced the overall performance of the camera even more, while if you combine all of these specs into one piece, the camera enables for continuous shooting speed of 7-frames per second, pretty impressive, right?

In terms of ISO performance, the Canon m5 has a native ISO sensitivity of up to 25,600, which means that you’re going to get stunning results even in low-light, due to the camera’s ability to deliver noise-free images, and for more convenience, it also has a built-in low-pass filter. A quick note, the M5 incorporates a built-in electronic viewfinder with a 2.36-million dot resolution and a fast 120fps refresh rate, so there’s that.

Now, no matter how good this camera may seem, it still lacks one of the most in-vogue features for videographers, 4K recording. Although, it can still record at Full HD 1080p, and in fact, it does a pretty good job at it, especially with the help of the remarkable autofocus system.

More precisely, the Canon m5 has a 49-point autofocus system which can easily track and maintain focus even with fast-moving subjects, while I found this to be true during my testing, and I even tried it with pets where I throw a ball so my dog can go get it, and as soon as the dog entered the frame the camera was able to successfully lock focus onto the dogs eyes and it maintained focus until the end, while by this, I also want to say that this camera would be great for wildlife photo shooters and videographers. 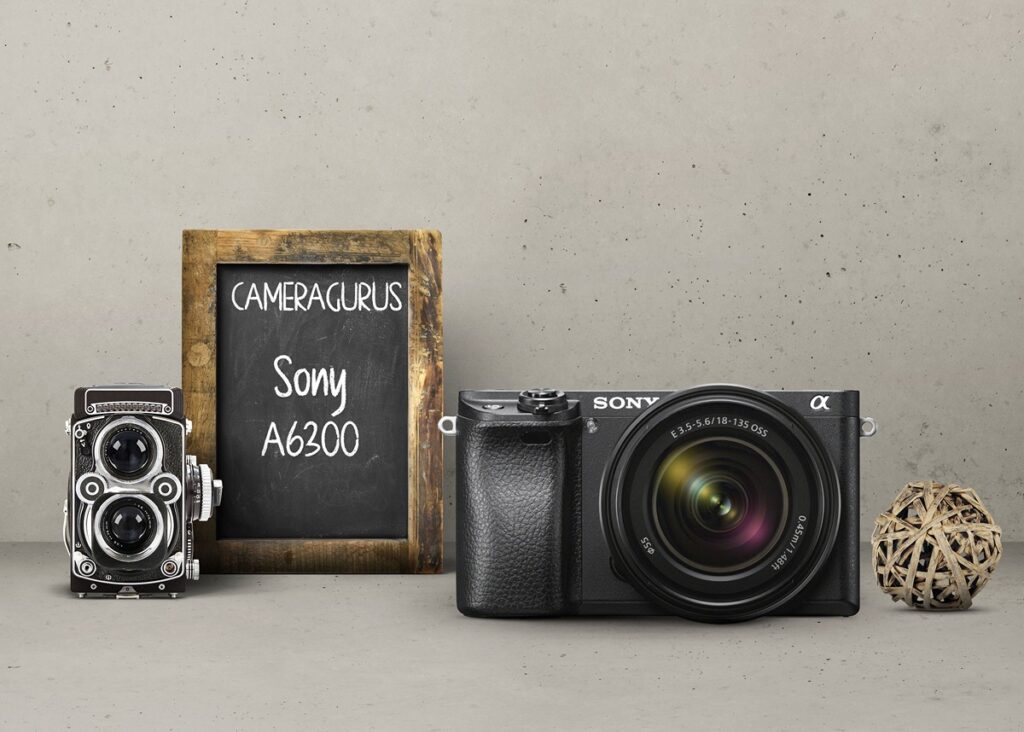 During these months, I’ve made quite some comparison reviews about the Sony A6300, one of which is the Canon m50 vs Sony A6300, however, it’s always fun and this is one of my favorite mirrorless cameras. and I’m going to show you why in just a bit.

First, the Sony A6300 boasts a very unique design featuring a compact and light construction, while it packs some pretty high-end features and premium performance within. Similar to the Canon m5, this one also has a sculpted handgrip but it isn’t as deep, but nonetheless, it still provides remarkable comfort, while similar to the m5 this one also has textured sides, but I don’t really find them as attractive as with the m5.

When it comes to the button layout, Sony has kept it pretty simple, it has the most commonly used buttons for direct access to some of the key features, while everything feels well-balanced and spaced, and it seems pretty solid since everything is well-thought-out.

In addition, this particular camera features an electronic viewfinder similar to the m5’s, featuring a 1024 x 768 pixels XGA, and it has a refresh rate that stretches from 60 to 120fps.

Apart from that, the Sony a6300 has a 3-inch tilting LCD screen which means that this also is suitable for videographers as it allows for different shooting angles, but there’s an area where this camera disappoints me, it lacks one of the most commonly used features in an LCD, touchscreen capabilities. For the price, I think that the manufacturer could have done a better job since this feature has become pretty common even with entry-level cameras.

Performance-wise, same as the Canon m5, the a6300 also has a 24-megapixel camera, but different from the m5, this one, in my opinion, runs a weaker image processor, the Bionz X, but there are some areas where the A6300 outperforms the m5, such as the autofocus.

More precisely, different from the Canon m5, the a6300 features a 425-phase detection autofocus system which is a lot better than the 49-point AF of the m5, while in terms of ISO performance, the Sony a6300 has a sensitivity than ranges from 100-51,200, and same as the m5, this one also is a remarkable low-light performer, to be exact, it delivers noise-free images even at extreme ISOs, while the quality is enriched with sharp details, vibrant colors, and without no blur.

Furthermore, it’s also important to note that the Sony A6300 has a continuous shooting rate of 11-frames per second which is followed by continuous autofocusing and tracking, and with the help of the 425-AF points, the camera is able to easily maintain focus even with fast-moving subjects, whereas I highly recommend this camera to active shooters, sports, portrait photographers, weddings, events, and so on.

When it comes to video recording, the Sony a6300 has one of the most in-vogue features for videographers, 4K recording as well as the standard Full HD 1080p recording. But that’s not all, since you are also provided with other features and enhancements, such as silent shooting features with continuous autofocus and auto exposure, and the ability to use AF in focus magnifier mode, expanded flexible spot AF, Eye-Af in AF-C mode and more.

Before we end, for instant sharing and transferring your images, the Sony a6300 consists of a built-in Wi-Fi, NFC or via QR. And for more convenience, you can also connect via Sony’s PlayMemories Mobile app which is available on both iOS platforms and Android.

As a final verdict, the Sony a6300 is a feature-rich mirrorless camera which packs premium features along with an incredible performance, while I would highly suggest this camera to videographers, for sports, wildlife, action shooters, for events and weddings, mostly due to the impressive autofocus system, and the plethora of features made specifically for these kinds of tasks.

All and all, both of these cameras are great, no matter in what aspect you view them performance-wise, feature-wise or specs.

However, for this article, I must give the win to the Canon m5, it simply delivers more value for money, but if you view them from numbers, the Sony a6300 is more high-end.

Personally, I would recommend the Canon m5 to those who want a decent camera with decent features and performance, it’s great for portrait photography, wildlife as well as still photography.

On the other hand, when it comes to the Sony A6300, it’s a high-end camera perfectly suited for videographers due to its remarkable 425-point autofocus system and the above-mentioned features.

As we reached the end, now I believe that you have enough facts and arguments to support your decision on whether the m5 is best for you or the a6300, but take in mind that no matter what you choose, you can’t go wrong with any of them since they are both perfect at what they do.