Now, when it comes to these two cameras, they both take place in a similar price range, and these cameras both share similar specs and performance. However, we will try to point out even their slightest differences, so at the end of the article, you’re going to know which one of these cameras outperforms the other.

Okay, let’s just say a few words about each camera.

The Canon M50 is an interchangeable lens camera that comes in a compact construction, while it is most suitable for aspiring photographers that are looking for an easy way to boost the quality of their photos and videos. It has 4K capabilities, while it also delivers snap vibrant, eye-catching photos with its 24.1MP CMOS sensor, however, we’re going to talk about more details and specs later in this review.

As for the second camera, the Sony A6000 is known for its superb quality, quick autofocus, and portability. Sony is very different from its competitors, starting with the Fast Hybrid AF which combines the sparks and strength of both phase and contrast-detection autofocus. For its category, Sony is ahead of every other competitor with its 179 phase-detection points, and a high-speed contrast-detection function, while the result of this will not only be the 11fps burst mode, but also precise and accurate tracking for both stills and video.

As you can see, these cameras are both unique in their own way, and this brings up what I’ve been saying in almost every camera comparison I’ve made, price doesn’t really matter, what matters is the features that you’re after, that’s how you define which camera is best for you. Although, when it comes to features and specifications, I’m still going to define which camera is more feature-rich, and which camera is the best overall. 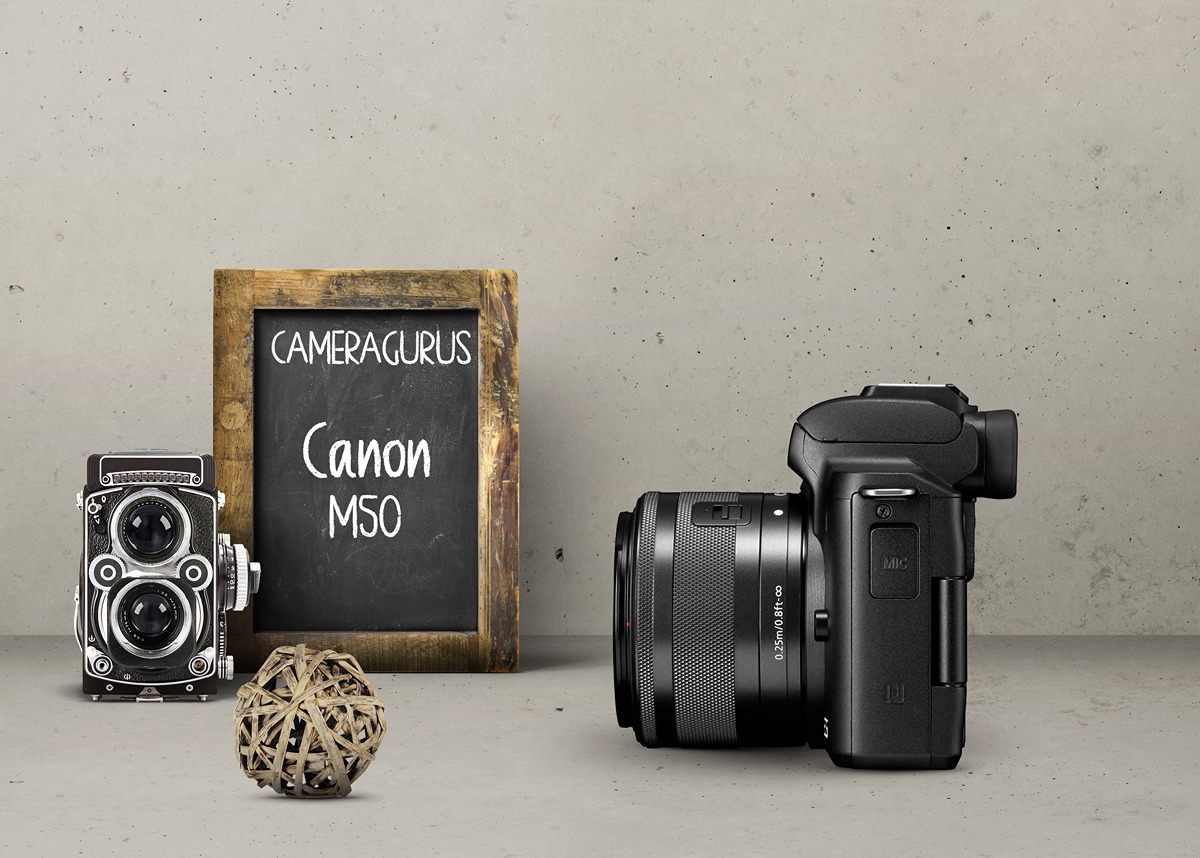 For starters, we mentioned a couple of things about this camera during the introduction of this article, however, let’s just point out again that this mirrorless camera is a uniquely designed device which offers great image quality while it is also easy to use, and has a plethora of features and controls, however, it’s still not the best option out there, especially for this price range, but we’re going to talk about that later in this review.

To start off the right way, let’s just point out that the Canon M50 features a 24.1MP APS-C CMOS sensor, while it has a sensitivity range of ISO100-25,600, and it can also be expanded to 51,200. It is similar to previous Canon models, however, it has a noticeable difference in the number of effective pixels due to the new processor. To be more precise, the M50 is the first mirrorless Canon camera which features the company’s latest DIGIC 8 image processor.

In addition, due to the capabilities of this remarkable processor, the camera is also able to shoot 4K movie footage, something which has been missing in a lot of Canon’s recent cameras, and some other rivals at this price range.

Nonetheless, that’s not all, since the Canon M50 is also able to shoot 4K timelapse footage, while it will allow users to pull stills from the 4K footage, with 8MP files.

But as there are many advantages to this camera, there are also disadvantages. Even though you can shoot 4K video, the camera won’t use the entire breadth of the sensor, more precisely, it will have a 1.6x crop. This may be a real concern for some vloggers who intend to use this camera as their everyday runaway tool.

In terms of usage, this camera is great for tight portraits, however, it may disappoint you if you plan to use this camera for filming at arm’s length or in a confined space.

Nonetheless, you can share your results quickly and easily with built-in Wi-Fi, NFC, and Bluetooth technology, because Canon has included all of those in this camera.

Since we mentioned the DIGIC 8 image processor, the 4K video is not the only upgrade that comes by it, there are improvements that include a greater coverage of the frame as well, and apart from that, you will also have 143 AF points at your disposal, but if you compare it to Sony’s 179 phase-detection points, that’s not quite rivaling.

Moreover, in terms of construction, this camera has a chassis that is constructed by a strong polycarbonate, and with a leatherette-effect textured handgrip, it simply gives the camera a premium feel and appearance.

Before we end, let’s not forget to mention that the M50 is able to deliver remarkable sound performance when it comes to AF tracking, however, if the subject is moving very fast, you will not get the performance that you expect, nonetheless, the Dual Pixel CMOS AF will give its best at following and keeping the subject within the frame. It’s very good at doing its job, we even listed it as one of the best cameras for hairstylists!

To get the most out of it, i would also recommend you take a look at our Canon M50 Lens buying guide.

Simply put, it’s a decent camera with decent performance and a set of useful features, but now, let’s see what the Sony A6000 is capable of.

We already mentioned a couple of advantages that this camera has, however, we also mentioned somethings that the Canon M50 is better at, for example, 4K video capturing, since the Sony A6000 doesn’t have that.

The Sony A6000 comes in a super compact shape, and as it is a Mirrorless camera, it has half the size and weight of a typical DSLR, but it doesn’t sacrifice performance nor quality for that since it uses the same APS-C image sensor as most DSLRs.

This particular camera is able to capture 11fps in continuous shooting mode with AF tracking by having a wide-area which is possible thanks to the 179-point phase-detection AF sensor. Unlike the Canon M50, with this camera, even if you’re dealing with fast action, the A6000 is pretty good at tracking moving subjects, while with its performance, it ensures you get a great shot during still or video capture, whatever you choose it to be.

We haven’t mentioned the image sensor’s specs yet though. With 24.3MP Exmor APS HD CMOS image sensor, this camera offers incredible details and gorgeous enlargements, while its resolution is higher than most of the other competitors and DSLRs at this price range, and some of the above. Other than that, the Sony A6000 consists of a gapless on-chip lens structure which provides the user with ultimate image quality and light sensitivity.

Nonetheless, these are not the only thing that improves the image quality, there is a new BIONZ X image processor present as well, which reproduces textures and details in real-time using the extra high-speed processing capabilities to allow for realistic and true-to-life images. Nature details will be rich, tonal gradations will be stunning, and above all, you will also have lower noise and more realistic images no matter what you’re shooting, stills or video.

As we reached this point, you can already tell that this camera really includes most of the premium features and a breathtaking performance seen in more expensive cameras.

Instant sharing is also something that you should really acknowledge since the Wi-Fi connectivity allows you to control the camera using your Smartphone or Tablet and the PlayMemories Camera App. Therefore, you can easily transfer images that you’ve taken directly to your mobile device for editing or uploading.

Furthermore, with the help of the new Exmor CMOS sensor and the BIONZ X processor, you get a native ISO range of 100-25000, which is great for low light. But that’s not all, the A6000 also includes a pop-up flash and a standard hot shoe specifically for an additional burst of light.

Before we end, let’s also mentioned that you can record at Full HD 1920 x 1080 with cinematic 24p or for fast action at 60p and 60i frame-rates. As an advantage to most rival DSLRs or mirrorless cameras at this price range and some of the above, this camera has a 100% frame coverage and a wide viewing angle for clear visibility from corner to corner. This is a suitable camera for photojournalists because it’s very easy to carry around.

Overall, even though this camera doesn’t have 4K capabilities, it’s still better than the Canon M50 in some aspects, however, the M50 is a tad ahead when it comes to features.

By now, I think you know which camera meets your requirements the most, as we’ve explained every feature of both cameras, while we also talked about the specs of both these cameras.

My final verdict is that the Canon M50 has more features than the Sony A6000, however, I find the Sony A6000 to be better in some aspects.

Nonetheless, if you’re someone who is really concerned when it comes to specifications, the Canon M50 would be your ideal choice, since it is also ahead with features including the touchscreen, the 4K video capabilities, the ISO range, and so on.

As for their prices, they are both at a similar price range, so you can’t go wrong whatever you decide on buying. We mostly recommend the M50 for semi-professionals, for still photography, or portrait photography. On the other side, the Sony A6000 is perfect for vlogging, and due to its compact size, it makes for a perfect camera for travelers.