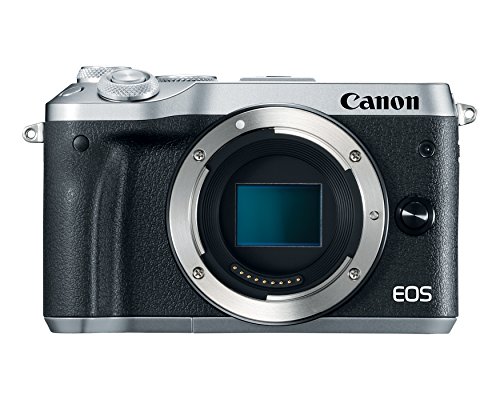 The Canon EOS M6 is a semi-pro mirrorless camera that does not look nor perform in such way, due to the fact that since its launch date ( in February 2017), it has quickly established itself as a top option for everyone who wants to invest in an all-round camera that will provide you a truly exceptionally convenient user experience!

Opposed to the EOS M6, the Sony A6000 was released in February 2014, so, it is 3 years older than the EOS M6, however, this doesn’t mean that age could make a huge difference, mainly because of the fact that if we take into consideration that the A6000’s performance and build quality was ahead of its time back then, even today, it is considered or it is being widely used by thousands of photographers which is nothing to be surprised of.

Since I have an opportunity to review these two cameras, I have to inform you that this article is going to be entertaining because both cameras share many things which by default make them be very interesting to make a head to head comparison. Shall we start? Tighten your seatbelts right now, because we are getting into action right away! 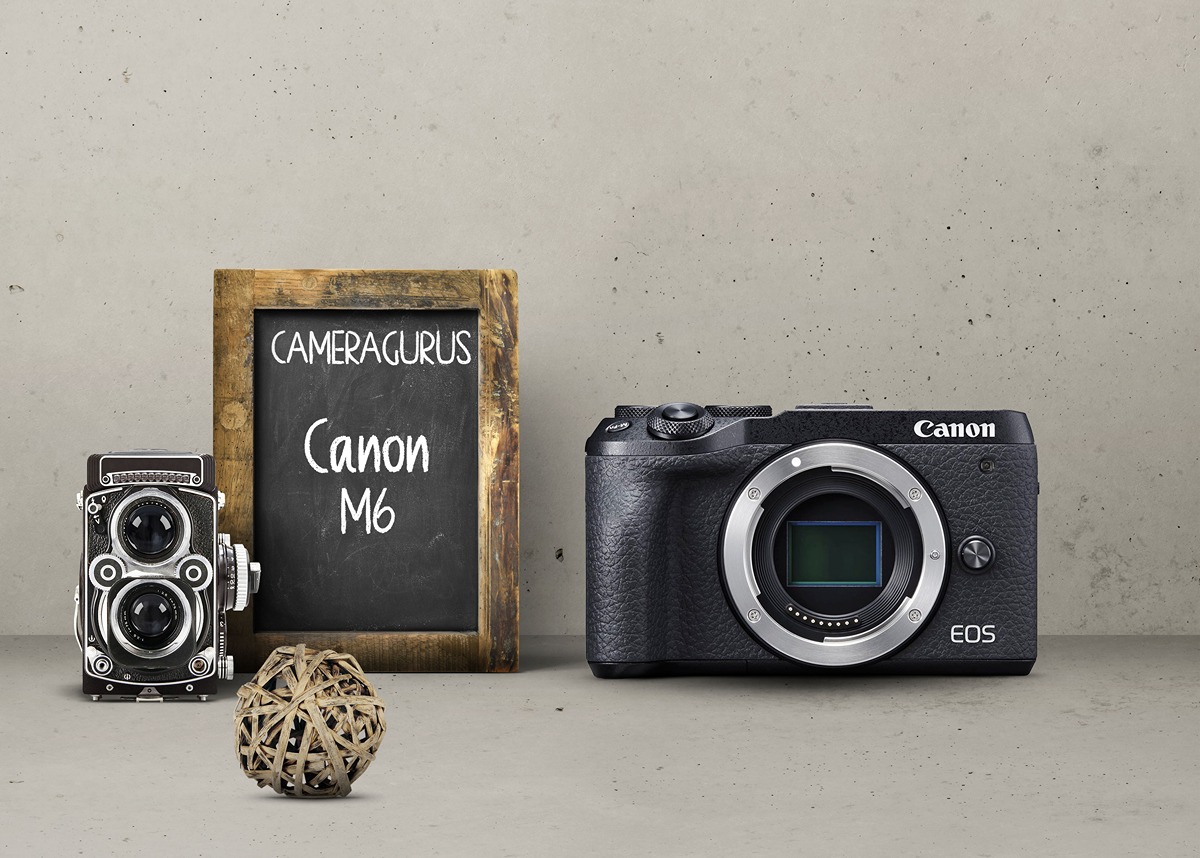 The Canon EOS M6 is a handsome, black-finished, compact camera that measures only 2.7 x 4.4 x 1.8″, weighs around 13.8 ounces without a lens, and although it is made of a polycarbonate material that occupies the top part of the body,, still, it feels solid and comfortable to shoot with, which is therefore, one of the things that photographers are keen on having!

But what also contributes a lot to the comfort you’d feel during your photo sessions is actually the sculpted handgrip feels smooth in your hands, however, I think that Canon could have made it even better, because small-handed users will have the nearly perfect hold, whereas, those with larger hands may kind of face some issues holding it because it is smaller than you’d expect.

Moreover, the EOS M6 has a plethora of controls that are spread across its body. On the top-center, there’s a hot shoe on which you can set a wireless flash trigger, an external flash or a viewfinder, while on the right, there are twin dial controls that are followed by an M-Fn button, and shutter release button.

On the rear-top, you won’t find a viewfinder, and this is mainly because of the compactness of this camera, however, at the rear-center, there’s a 3″, 1,040k-dot tilting touchscreen that is unbelievably crisp, and it will dramatically ease your shooting experience because you will always have a crystal clear sight of everything you opt to capture.

In terms of the connection options, the EOS M6 employs a mini-USB port, micro-HDMI port, a 3.5mm microphone input, a 2.5mm remote connection, and a versatile, SD card slot that supports SD/SDHC/SDXC memory cards and all the way up to UHS-I cards, and it has a built-in support for Wi-Fi/Bluetooth/NFC which is one of the biggest highlights about this camera! The way you’d transfer your content from now on will be butter-smooth!

Performance-wise, the EOS M6 incorporates a Dual Pixel CMOS AF with phase detection, a 24.2MP APS-C CMOS sensor, DIGIC 7 image-processing engine, has a continuous shooting rate of 7 fps which may go up to 9fps with AF lock, and an ISO range of 100-25,600!

For your information, the EOS M6 controls the blur pretty well throughout the ISO range especially when it comes to JPGs. At ISO 3200, the noise is rarely present, and even if it is, it isn’t heavily pronounced so that would decrease the quality of the image, but, at ISO 1600, the image looks the best in my opinion, hence, I’d suggest you stick between ISO 1600-3200 to achieve the best results. Starting from ISO 6400, the in-camera noise reduction starts getting more aggressive which results in more blur, and at 25,600, the blur starts to overcome the image, and I don’t really think that it is advisable to push that high.

Aside from shooting JPGs, the EOS M6 will also let you capture RAW imagery, and even at ISO 6400, the blur is really well-handled, because details remain strong and the color accuracy is good as well. As expected, once you reach ISO 12,800-25,600, noise becomes more prominent and at these stages, the grain is heavily pronounced while the image does really have a rough texture, and yet again, I’d recommend you avoid this ISO sensitivity level.

Last but not least, the EOS M6 is also strong for recording videos thanks to the presence of the built-in, 5-axis image stabilization which does a highly effective job in minimizing the blur as you’re moving. In fact, the footage quality is superb if you ask me for the price you pay, and even though it lacks 4K capability, the EOS M6 records 1080p videos at 60fps in MP4 format.

From a design perspective, the A6000 is a compact and stylish mirrorless camera that measures 2.6 x 4.7 x 1.8″ (HWD), weighs approximately 12.1-ounces without a lens and sports a tough-built, magnesium-alloy construction that makes it strong enough to withstand daily use in a long-term, while maintaining its look on the highest levels, so that, even after a couple of years, you will unlikely recognize any noticeable change regarding its look.

The A6000 is also a comfortable camera to shoot with, thanks to its large grip that makes this camera easy to hold and shoot, and regardless if you have large or small hands, I’m sure that you won’t have any difficulties holding it in your hands.

Moving on, the control layout is well-organized, and in fact, it is very simple since each button is intuitively positioned so that you can easily access it and take advantage of it any time you want throughout your shooting sessions.

The top plate holds multi-interface shoe which sits on the center, while on the far-right, there is a Control dial, single, C1 customizable button, shutter release button and an On/Off power switch.

On the rear, the top-left corner holds an impressive, 1.44k-dot OLED electronic viewfinder that provides the photographer a coverage of up to 100%, a magnification of 0.70x, and it is really crisp which is surely a huge advantage because you will always have a convenient shooting experience without missing a single target!

Starting from the rear-top and all the way to the far-right, there are multiple controls that are kind of compressed due to the camera’s compactness, but either way, you will unlikely face problems accessing them in order to adjust the picture according to your preferences.

At the center, there’s a 3″ tilting LCD screen with resolution of 921k-dots, and although it outputs crisp visuals, I really think that Sony should have made it touch-sensitive, because you would have an even better user experience! In comparison to the EOS M6 whose screen supports touch gestures, clearly, I give more credits to the EOS M6 at this point.

Moreover, the connection options include a mini-USB, DC-IN, HDMI port, single memory card slot that supports SD/SDHC/SDXC/ Memory Stick Pro cards, and it is Wi-Fi and NFC-enabled, hence, I will leave this up to you to decide which camera deserves more points, because the EOS M6 aside from supporting Wi-Fi and NFC it is also Bluetooth-enabled!

Speaking of the performance, the A6000 packs a Hybrid AF with 179-point focal-plane phase-detection along with 25 contrast-detect points, has a 24MP APS-C CMOS sensor, burst shooting speed of 11 fps, a native ISO range of 100-25,600 which is expandable to 51,200 and it runs on a BIONZ X image processing engine which drastically improves the processing speed and the noise control throughout the ISO range for your ultimate user experience!

If you opt to shoot through ISO 100-800, keep in mind that at this stage, noise does not really exist, and the overall image quality is exceptionally strong. The same pattern continues even at ISO 1600-6400, however, starting from, here, the noise becomes more prominent and reaches its peak at ISO 25,600, which, therefore, should be avoided by all costs.

I’d also like to mention that the A6000 is doing a great job if you intend to shoot under a bright daylight, because colors are extremely accurate and look pleasing for the viewer, whereas, shooting during the night is pretty good, although you may notice some noise if you’re shooting in darker areas.

Aside from being a strong camera for capturing photos, the A6000 is also great for recording videos. Namely, it records 1080p videos at 60 fps, and as was the case with the EOS M6, it lacks 4K capabilities, but still, the footage is indeed delightful and I’m sure that you’ll like it!

Before we announce the winner, let’s quickly pass through the areas where the first camera beats the other, and vice-versa, because by doing this, your final decision will be the most accurate.

Otherwise, the EOS M6 beats the A6000 by having a touchscreen, a 12% higher resolution screen (1,040k vs 922k-dot), because of its 5-axis stabilization system, the selfie-friendly LCD, the built-in support for Bluetooth s well as at the inclusion of a microphone port and its timelapse recording ability.

If you ask me, I’d go for the Sony A6000, because it has kind of better specs, it is newer and employs a viewfinder, even though it costs more when compared to the Canon EOS M6.