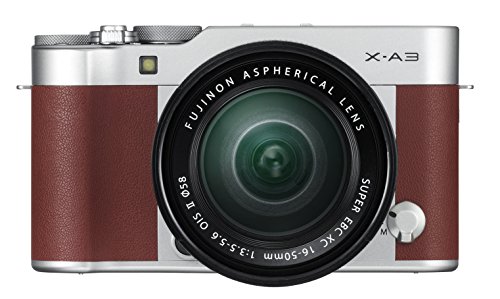 It’s really a joy seeing how mirrorless cameras are advancing every day, personally, I’ve been a DSLR user for years and I’ve only used mirrorless cameras when I had to review them. However, every time I use a mirrorless camera I see different upgrades in both terms of features and performance, while they’re slowly taking over the camera industry with their reasonable prices and top-notch performance.

In this comparison review, I’m going to be reviewing both products to detail, while comparing even their slightest differences, and in the end, you’re going to see a comparison table where I’ll point out the most key features and specs of both cameras’s so you’re able to see their most major and important differences.

As you may know, the Sony A6000 is more popular than the Fuji X-A3, it’s rated more and it has a more reasonable price, as for the Fuji X-A3 it was released 3 years ago but it didn’t quite steal attention or anything, it wasn’t quite a groundbreaking mirrorless camera for the industry, nonetheless, I was really amazed by the design of this camera and I thought I’d make a comparison review with one of the most highly-rated entry-level and budget-friendly mirrorless camera out there, the a6000, just to see how it does.

If you’re already a DSLR user or you’ve used better cameras before, then maybe these two cameras are not ideal for you, but again, they would be a perfect choice as a second camera to go with, while for novice users, they’re pretty much great. Okay, so now, let’s start with the reviews and see what these two mirrorless cameras are capable of. 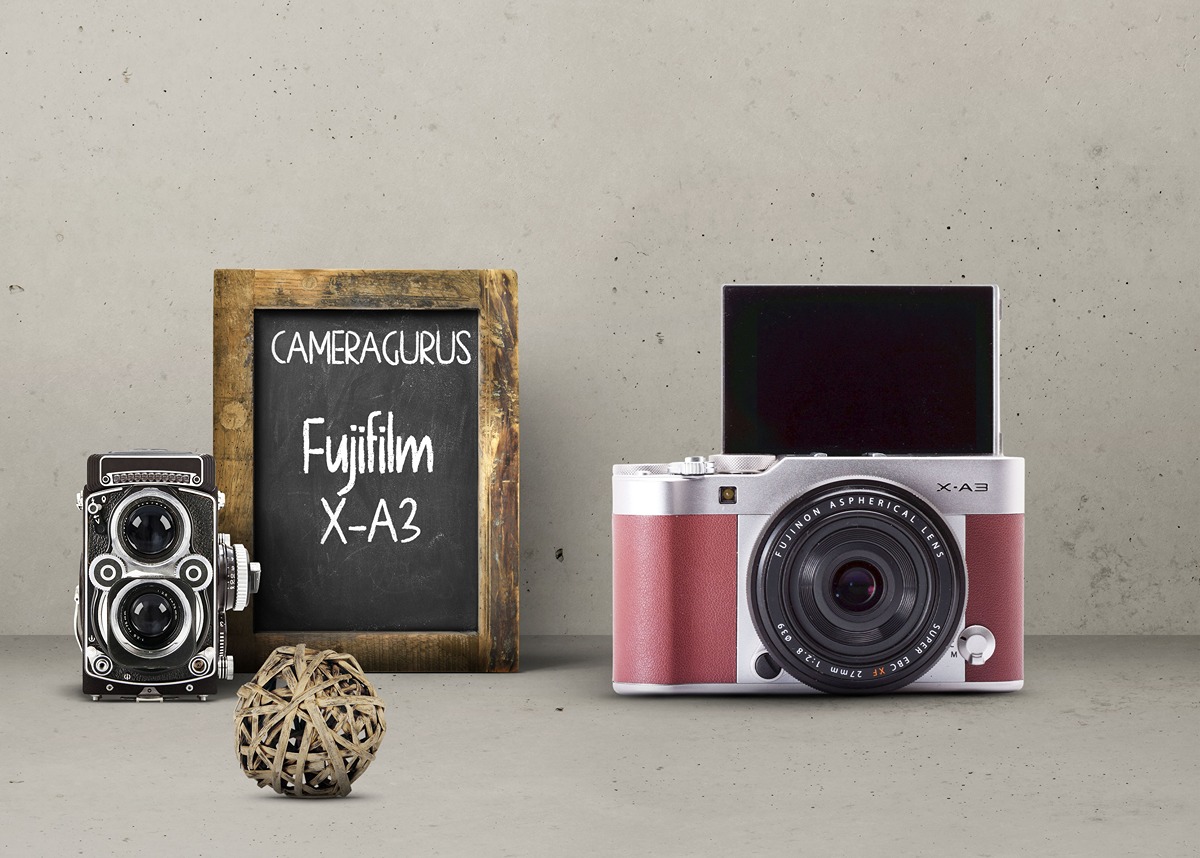 The Fuji X-A3 has a retro silver-brown design which is very eye-catching, while many people would mistake its silver body to be metallic or aluminum, but it’s not quite that, as you’d expect from its price, the body is plastic, well for the most part since all the main dials have that nice feel to them. Other body parts are covered with faux leather, but it’s not like with most DSLR’s which have rubberized textures on the sides, this material is a bit slippery and I would really recommend a strap when taking the X-A3 somewhere in the wild to prevent accidental drops.

Although there’s some good news about the camera and there’s some bad news, the included two dials make the camera more versatile and a tad ahead of the competition, however, their placement is not as you may call it “well-thought-out”. I’d personally prefer them in a more traditional position because they can be hard to reach, especially for those people with small hands.

What’s really makes this camera stand out from most other mirrorless cameras at this price range it’s the rear display. The X-A3 features a 3-inch LCD with 1.04-million dots which performs great whether it’s in outdoor light or indoors, you’re still going to get a stunning preview and display quality on the screen. Other than that, the tilt can tilt upward 180-degrees which means that you’ll be able to take selfies, while the touchscreen functionality is not quite what you’d expect, it’s limited in some situations, it’s great since to gain focus you can tap on the screen, while you can also navigate photos, but for the menu you’re going to have to use the four-way controller and dials.

Lastly, the Fuji X-A3 consists of a pop-up flash with a working range of 7m/23ft with an ISO of 200. There’s also a hot shoe available which lets you attach something more powerful if you want.

Okay, enough said for the design now, let’s get more into the specifics to see what else does this camera offer.

For starters, this mirrorless camera has a 24-megapixel APS-C CMOS sensor that combines with the EXR Processor II which effectively enhances the camera’s performance while making it able to work faster and to deliver more quality in stills and movies.

To continue, the Fuji X-A3 is a great low-light performer where during my testing, it delivered noise-free images at up to ISO 12,800, however, higher than that, I did recognize some noise and lack of detail on the images, to be more specific, the Fuji X-A3 has a max ISO of 25,600.

When it comes to the AF, this particular model has a 77-point contrast-detect AF system which is fast and accurate, while it can lock and maintain focus even with moving subjects with ease, so the camera is also quite decent for wildlife, portrait photography, sports, and so on.

It’s important to note that the camera has a burst rate of 3-frames per second, which isn’t much when you compare it to other mirrorless cameras at similar price ranges.

Moreover, for video recording, you are limited to 1080/60p/24p video, so for those hoping for 4K video, you won’t get that here, but hey, there are some film simulation modes available which can really enrich your recordings. To be more exact, these film simulation modes include Provia, Velvia, Astia, Classic Chrome, Monochrome, and Sepia.

Before we end, let’s also mention that there is wireless communication functionality that enables remote shooting from smartphone and tablet devices. All and all, the Fujifilm X-A3 is a reliable mirrorless camera that delivers great value for money, it has pretty much everything you could ask for in a mirrorless camera, besides the lack of 4K but I doubt that you’d need it if you’re a novice user.

Unlike the Fuji X-A3, the Sony a6000 was actually one of the biggest announcements in the mirrorless camera industry. From when it was first released to this day, it’s one of the most-highly rated cameras with a lot of functionality and features in a fair, budget-friendly and reasonable mirrorless package.

It features that traditional mirrorless design, it’s light and it has a compact shape which makes it preferable for travelers, while the handgrip is not its strongest point, it’s curved okay but it’s not that deep which makes it harder for you to hold the camera, especially if you have large hands. Although the rest of the design including the button layout is great, everything is well-thought-out and well-spaced in-between, which means the chances of you accidentally clicking some dial or button are set to a minimum if not zero. On the back of this solid camera, you’ll notice an electronic viewfinder that has a really good-sized eyecup and a sensor that is there for switching between the EVF and the LCD.

Since we mentioned the LCD, it’s important to mention that the screen has a 16:9 ratio while on one hand, this is great for movies, and on the other hand, for shooting 3:2 stills, not as much because you’re going to notice black bars on either side. Apart from that, this 3-inch tilting LCD has 921,000-dots, and in comparison with the Fuji X-A3, this one isn’t quite what you’d expect in outdoor light, in fact, it’s hard to see what’s on the display most of the time. There’s also one more thing that this camera lacks, touchscreen capabilities, but again, considering its price, I’m not really disappointed.

Now, let’s jump to performance, starting with the 24-megapixel APS-C CMOS sensor which delivers a stunning image quality since it combines with the Bionz X imaging processor, thus, real-time texture and detail reproducement is possible via extra-high speed processing capabilities of the Bionz X, which makes sure to deliver true-to-life images, while in other terms, this image processor enhances the overall performance of the camera noticeably.

Although there’s one area where the Sony a6000 outmatches the Fuji X-a3, this one has a continuous shooting speed of 11-frames per second, which is ahead of many other rivals at this price range and some of the above. In terms of ISO performance, the a6000 has a sensitivity that stretches from 100 to up to 25,600, and to be exact, it’s a great low-light performer even in extreme ISOs where I didn’t really notice any noise to ISOs up to 12,800, while further than that, the highlights and over-exposure are going to make the image lose quality.

What’s also appealing is the Hybrid autofocus system of the camera with 179-point focal-place phase-detection AF and 25 contrast-detect points. It’s a lot better than the 77-point AF of the Fuji X-A3, while these specs enable the camera to be great for action, sports, wildlife, portrait photography, and events.

On top of that, this particular camera has an impressive OLED electronic viewfinder as well, with a field coverage of 100% and 14M-dots. Same as the Fuji X-A3, the a6000 also lacks 4K recording, which again, it’s not really a surprise for cameras at this price range. Although you can record at 1080/60p and 24p.

For instant image sharing or transferring the a6000 consists of a built-in Wi-Fi, NFC, and you also get to connect via the PlayMemories App which also allows for remote camera control.

The A6000 is a well-rounded camera with tons of features for its price, while it also has a decent performance which makes it perfect for everyone who wants a budget-friendly but feature-rich mirrorless interchangeable lens camera.

If you decide to go with the A6000, i’d also recommend you read our article on the best flashes for Sony A6000.

In the end, both of these cameras remain great, however, as we got the comparison table out of the way, I believe you have enough facts to support your decision.

There are some notable differences between them, such as the 77-point AF of the Fuji and the 179-point AF of a6000, while another bad area of the Fuji X-A3 is the lack of an electronic viewfinder, which the a6000 has.

I would highly suggest the Fujifilm X-A3 to still photographers who are just starting out, portrait photographers, wildlife, sports, and events. On the other hand, the A6000 is great for all of those as well, it’s the smallest mirrorless camera on the market which packs a plethora of premium features within.

If you were to decide between these two cameras, and considering that these cameras are for people who are just starting out, I’d recommend the Sony a6000. Photography and videography enthusiasts are going to enjoy everything that this budget-friendly mirrorless camera delivers.