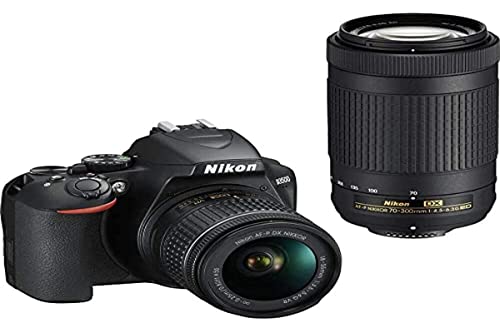 Nikon’s D3500 is a reliable entry-level DSLR range that throughout their existence have proved themselves as an amazing decision for novices who want to flourish in the field of photography since this range allows users to record quality videos,shoot overwhelming photos, and let them adjust controls and switch between menus easily in order to adjust the performance according to their preferences.

These things are key reasons especially for beginners who need to adapt to shooting with DSLR camera, and the Nikon D3500 as a member of this range isn’t different at all!

Canon EOS Rebel T6 is a great option for beginners who would like to get a relatively affordable entry-level DSLR camera that doesn’t look nor perform in such a way. Canon is one of the best manufacturers on the market, hence, they are always paying attention to producing quality entry-level cameras, due to the fact that beginners can hook up to photography career quickly and improve themselves until they reach the professional level.

Canon T6 is a direct successor of the well-known EOS Rebel T5 that packs numerous useful features along with good specs for an entry-level product, so let’s see what can you expect in practice by both cameras, the Nikon D3500 and Canon T6. 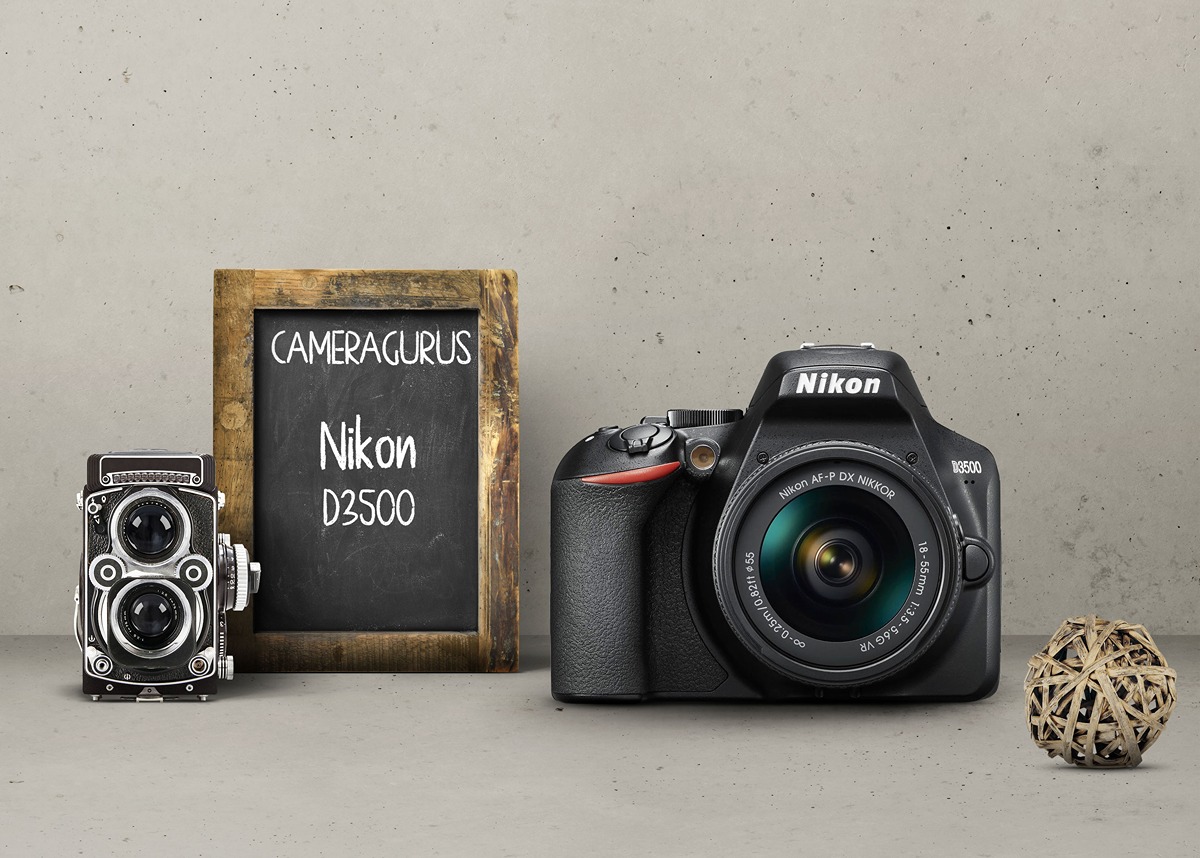 The Nikon D3500 boasts a surprisingly compact and lightweight, glossy black body that measures 3.9 x 4.9 x 2.8″, weighs only 12.9 ounces without a lens, and if we inspect these specs closely, we can conclude that D3500 is indeed light and compact for an SLR camera. In our real estate camera reviews article, we named the D3500 as the best small camera.

In addition, the grip is a bit thicker, and as a matter of fact, the grip material feels the same as most of Nikon’s DSLRs cameras which make it feel a bit clumsy if you prefer attaching bigger lenses.

The controls are positioned in a simplistic fashion, they aren’t many, but they are useful and each of them is placed with the intention to offer you a quick access, so that you can tailor the presets however you want.

For instance, on the rear, buttons are placed between the 3″, 921k-dot and rear thumb rest, but, you can also find a button that sits on the left side, next to the viewfinder of which you can take advantage and use it to adjust the power or the flash release.

For your information, the screen is fixed, unfortunately, and lacks touch-sensitive capabilities, however, for the price you pay I think that it will do its job pretty well.

Moving on, D3500 has a single memory card slot that supports SD, SDHC and SDXC cards, it is Bluetooth-enabled, and you can transfer your photos and videos to your Android or iOS devices by taking advantage of Nikon’s SnapBridge app, however, what it lacks is Wi-Fi, which is yet again, normal considering the fact that this camera is entry-level and its price cost is affordable.

Speaking of the performance, the D3500 comes armed with a 24MP APS-C sensor, an EXPEED image processing system has an 11-point autofocus system that comes handy especially if you shoot through its viewfinder, its continuous shooting is rated at 5 fps and the ISO range stretches from 100-25600!

In practice, if we combine its lightweight construction with the hardware, the photographer can really benefit by having this camera mainly because of the fact that it is ideal for travel, and for casual photo shooting. The D3500 is reliable for capturing sleek photos in dimly lit conditions, and during the night, if you prefer capturing landscapes at high ISO sensitivities

If you have an opportunity to shoot with this camera, keep in mind that the sensor starts at ISO 100, which is therefore, the default setting and it is the most appropriate for shooting in bright light. Details are still well-defined even if you shoot through ISO 1600, however, the ISO 12800 makes pictures look blurry and the overall quality of the details is low. Otherwise, details are nice even at ISO 3200, although JPGs will appear a bit smudgy.

Finally, the included battery has a life of 1550 shots, and even though this camera doesn’t support in-camera charging, you can use the included external wall charger without any problem.

If you decide to go with this camera, you should also get a zoom lens for your Nikon D3500. 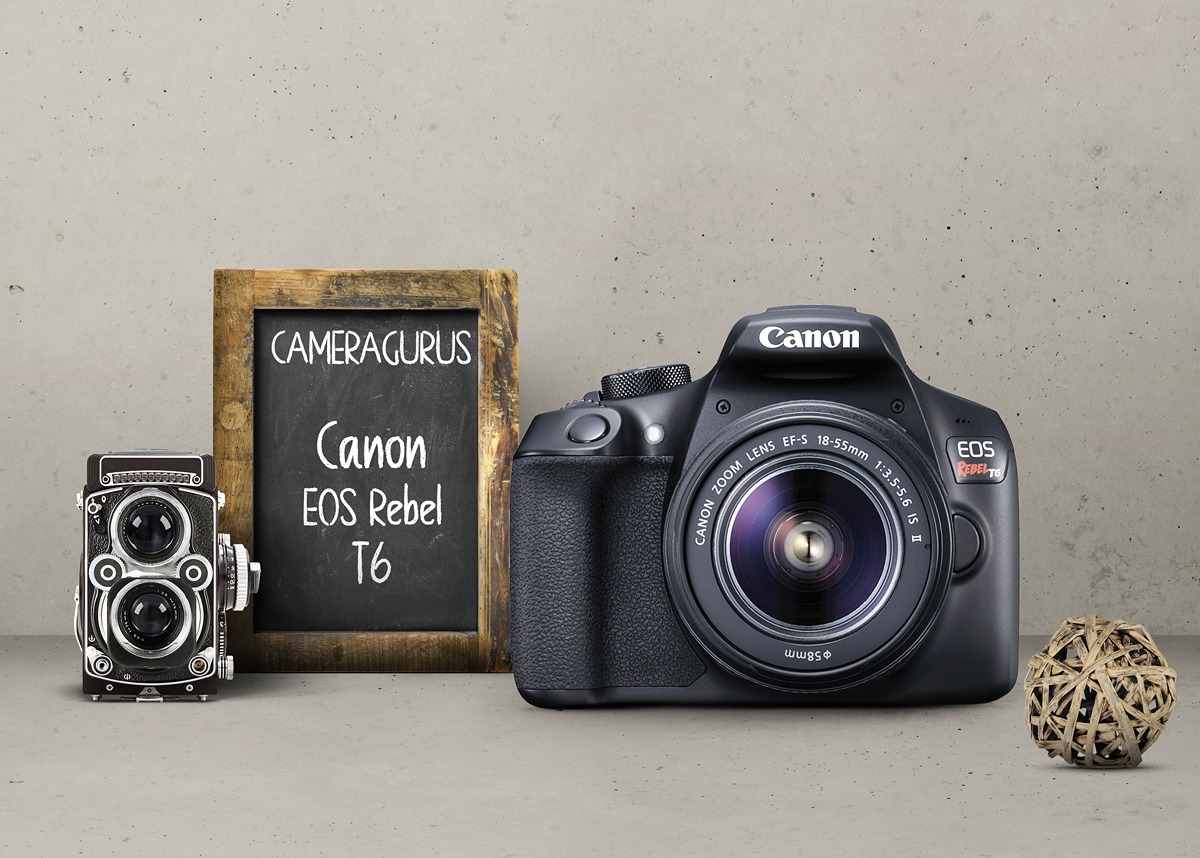 The Canon EOS Rebel T6 employs a polycarbonate construction that is accompanied by a textured coating and a contoured grip which is something that I really favor due to the fact that the grip will fit nicely to your fingers, especially when your index finger is positioned on the shutter release. However, if you have larger hands, you may experience less comfort, however, I doubt that it will affect your experience.

Canon did an excellent job in implementing an intuitive control configuration, because as was the case with Nikon D3500, the buttons of this camera are intuitively positioned. On the rear, there are dedicated buttons for adjusting ISO sensitivity, exposure compensation, autofocus mode, etc, while on the top of the camera, there is a scrolling dial along with a few other buttons that will let you switch between shooting modes and even choose a video mode.

Furthermore, the 3″ LCD 920,000-dot display occupies the central part of the rear, and even though lacks touch and adjusting capabilities, offers Live View shooting which is of a decent quality, because even in bright daylight it lets you have a clear sight.

In comparison with Nikon D3500, this unit is Wi-Fi and NFC-enabled,hence, you will never face any problems when it comes to sharing imagery from your camera to your smartphones, and here, Canon T6 wins the race! In addition, the interface includes an HDMI Type C terminal, USB 2.0 terminal as well, and without a doubt, Canon deserves our applaud here.

Performance-wise, the Canon Rebel T6 utilizes an 18.0MP CMOS APS-C sensor with a DIGIC 4+ Image Processor, has a 9-point AF system, an ISO range that is expandable up to 100-12800, although its native range stretches from 100-6400, and a continuous shooting rate of only 3 fps.

The results you can expect when shooting with this camera is brilliant to be honest, and the reason is pretty simple. Its internal components contribute a lot regarding the quality of the imagery you shoot because they are warm, have a satisfying amount of saturation and its 18million pixel sensor distributes a higher level of detail.

For example, JPEG images will look sharp if you shoot from ISO 100-3,200, but once you reach the point of IOS 6,400, you will notice that the quality is getting worse, but since you’re a beginner this won’t affect your experience negatively.

Also, keep in mind that if you cross the boundaries and switch to ISO 12,800, images will look more like they are painted and won’t have that natural look.

It was a tough war, wasn’t it? Nikon and Canon never let us have a quick decision when it comes to comparing their products because their cameras will unlikely disappoint a typical user regardless of the model he/she chooses.

Either way, if we compare Nikon D3500 and Canon Rebel T6 head to head, the first camera packs 24MP sensor while the latter 18, and if we take a look at the AF points, well, Nikon wins again with its 11 focus points due to the fact that T6 has only 9.

But hey, the race isn’t over yet. Rebel proves itself as a better performer at connection options that provides to its users including Wi-Fi and NFC, things that D3500 unfortunately lacks. On the other hand, Nikon D3500 has a continuous shooting rate of 5 fps, whereas, T6 has only 3.

What both of them share is the lack of weatherproof construction, 4K video quality, and articulating touchscreen.

If you ask me, I’d go for Nikon D3500 if you want to shoot sports photography because it shows better results, but for other situations including casual photography, portrait, landscapes etc, Nikon is a bit better. This is just an advantage of a newer product because D3500 was produced in 2018 whereas Canon Rebel T6 was launched in 2016.

Last but not least, even the price is similar to each other, so, after all, I think that you have enough arguments to be the final judge because your decision depends on a variety of factors, and all of them are mentioned in this article. Just keep one thing in mind, regardless of your decision, you will unlikely go wrong regardless of your because both of them are excellent, entry-level DSLR cameras.