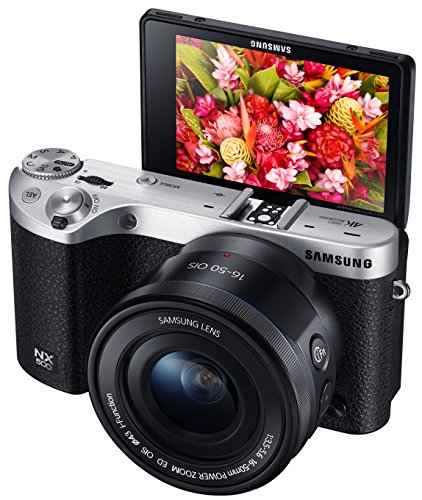 The Sony A6000 and Samsung NX500 are two excellent mirrorless interchangeable lens cameras that have appeared on the market in April 2014 and February 2015 respectively, and although there is around 14 months difference between them, there isn’t a significant difference between them in terms of technology, a fact that contribute a lot into making a truly entertaining comparison regarding these cameras.

That’s why, I’d suggest getting into action right away and find out why are they popular even in 2019, and how can they help you achieve excellent shooting results, regardless if you capture photos or record video! Ready? Let’s go!

The Sony A6000 is a very compact, yet well-made camera that is available in multiple color editions, including the all-black which I’m currently reviewing, the silver, white and graphite, but what all of them have in common is the stylish look that is beautiful enough to grab the attention even of the most demanding photographers!

Furthermore, as mentioned previously, this is a really-well made camera that does really feel and look expensive! The reason behind this is the Sony’s decision to craft this camera purely out of magnesium-alloy, and even introduce a weather-sealing that surely adds a lot in terms of making it more rugged, and strong enough to resist moisture and dust! Good job, Sony!

Also, if you take a look at the camera’s measurements – 2.6 x 4.7 x 1.8″, and its approximate weight of 12.1 ounces without a lens, and combine it with its grip that employs a texture-coating, I can easily say that you can shoot comfortably for hours anywhere you go!

In addition, the A6000 has a nicely-organized control layout as well, which is surely a huge advantage since most of the times throughout your shooting experience you will require to tailor the settings to suit your desires.

On the top-center, there’s a multi-function hot shoe, while on the right, there’s a single Mode dial that sits next to a Control dial, positioned above the shutter release button that has an On/Off switch and the customizable C1 button which are located close to the grip.

If you view from the rear, you” notice that Sony kept the design simple. On the top-left, there’s a viewfinder which is followed by a 3 buttons that stretch up to the far right side of the body, whereas, on the right-handed side, although controls are a bit compressed, you’ll still have easy access. In the usual center, position, you can find a 3″, tilting LCD screen that has a resolution of 921k-dots which lets the photographer have a truly remarkable shooting experience, although its angle is limited up to 45* when you opt to face it downwards. Unfortunately, it lacks touch-support, hence, I think that Sony could have done a better job here.

If you’ve been asking yourself regarding the viewfinder, well, it is small, has a resolution of 1,440k-dots and employs an OLED design which distributes a higher level of contrast so that you will have an undistracted sight once you lock onto a specific target.

Moreover, this model holds an HDMI port, USB port, a single memory card slots that support SD/SDHC/SDXC media and UHS-speed memory cards as well as it has a built-in support for Wi-Fi and NFC which is awesome, because you can smoothly transfer your captured content!

Now, let’s talk about the performance.

The Sony A6000 is armed with a BIONZ X image processor that ensures fast processing speeds paired with a superb control over the noise, a 24MP APS-C CMOS sensor, exceptionally strong hybrid 179-point AF with 25 contrast-detect points, burst shooting speed of 11 fps, and an ISO range of 100-25,600 which can be expanded up to 51,200!

What makes this camera stand from the “crowd” is its ability to perform nearly evenly good in both, low and high sensitivity settings. To be more precise, if you shoot through ISO 400, you will unlikely find occurrences of noise, unless you really want to find.

As you’re pushing higher, you may notice a bit of noise, but in general, it is handled so well that images are simply meant to be used. For instance, the farthest I’d advise you to go is between ISO 3200 – 6400, because in my opinion, these ranges output the best results.

Once you reach the upper ISO sensitivity ranges, blur starts to appear more, and if you opt to shoot JPGs, I wouldn’t recommend you to go that far because images may not be usable since details are really blurred.

For RAW format images, the story is different because, even at ISO 12,800, images are still usable, but going beyond, once again will prove as a bad decision.

Last but not least, the A6000 is excellent for video recording, due to its ability to record 1080p videos at up to 60 fps, and honestly, I really think that you’ll the clarity of the footage! 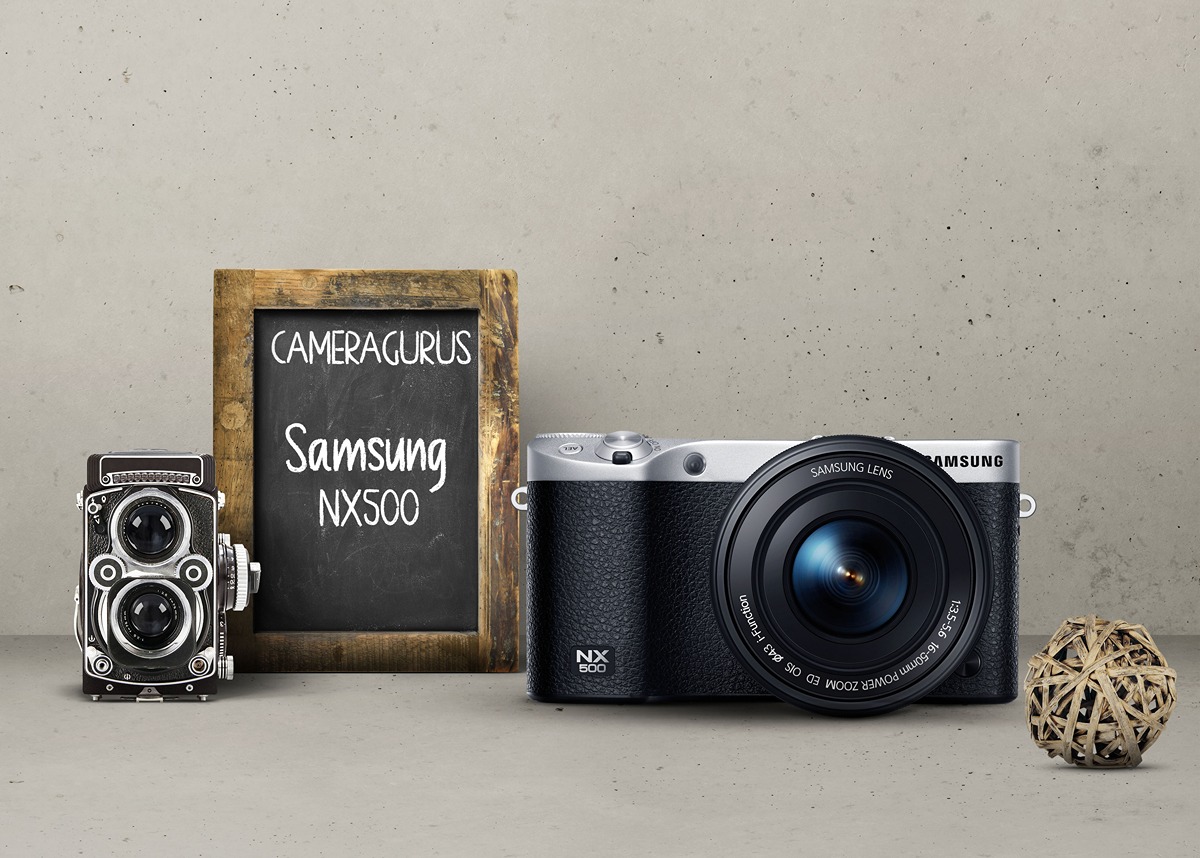 The Samsung NX500 has the typical size of a mirrorless camera, it measures around 2.5 x 4.7 x 1.7″ (HWD), weighs 10.1-ounces without a lens, and it is available in multiple color editions, but what’s interesting is that nearly all of them have a silver top plate, although there’s an option to get a leatherette, brown or black covering.

In addition, the NX500 is nicely engineered as well, it has a fairly slim, two-toned designed body with a curved, textured handgrip that promises secure and comfortable hold, however, in comparison to the A6000 who employs a weather-sealing, this camera doesn’t, so, you may not have the best user experience if you found yourself shooting in different environment and weather conditions.

When it comes to the control layout, the top plate houses a hot shoe positioned on the middle, dedicated Wi-Fi button, a standard Mode dial, a Control wheel, and a shutter release button with an On/Off switch along with an AEL-labeled button that sit above the handgrip.

On the rear, all of the controls are spread on the right-handed part of the body, and although they are somewhat squeezed, you can still easily access them and adjust the picture to suit your style.

In comparison to the Sony A6000, the NX500 lacks a viewfinder, so the only place through which you can shoot would be the LCD screen.

For your information, the 3″ Super AMOLED screen is extremely sharp and offers the photographer a huge convenience regardless if he/she shoots outdoors on a bright daylight or not, and what’s even cooler is that it is touch-enabled, has a resolution of 1,036k-dots and it is tilting at the same time, which means that you can adjust its position upwards for 90-degrees, flip it up for 180-degrees and downwards for 45-degrees. Hence, you will never face difficulties to shoot from different angles and achieve remarkable results!

Moving on, the NX500 offers you multiple connection options as well, including a micro USB 2.0 port, an HDMI port, single memory card slot that supports SD/SDHC/SDXC cards, and it is also both, Wi-Fi and Bluetooth enabled which is something that I absolutely favor! Here, the result is a tie, because the A6000 aside from being Wi-Fi enabled is also NFC, whereas, this camera has a Bluetooth instead of NFC. Who wins here? Well, it’s solely up to you!

Performance-wise, the NX500 houses a 28MP Back-Side Illuminated APS-C sensor, an impressively good NX AF System III with 205 phase-detect autofocus points, has a burst shooting speed of 9 fps, and an ISO range of 100-25,600 which is also expandable up to 51,200 as the Sony A6000.

In practice, the NX500 shares nearly the same performance as the Sony A6000, both cameras hold the detail level high through ISO 600, but the difference becomes a bit more in favor of the Sony A6000 at ISO 1600.

For RAW images, the NX500 outputs better results due to the fact that Samsung’s noise reduction is prone to reduce the noise in an aggressive fashion, hence, the details may appear smoothened most of the time.

Finally, the NX500 wins the race at videos. Namely, on the contrary to the Sony A6000, this camera records 1080p videos at 60 fps, 4K videos at 24 fps, and UHD videos at 30 fps, therefore, you’ll be able to use the NX500 for “professional” purposes and expand your skills as a videographer as well!

By now, I’m sure that you’ve recognized the potential that both cameras possess, and also the fact that they are excellent considering their price tag. But, before I announce the winner ( in my opinion), let’s quickly go through the areas where the Sony A6000 outperforms the NX500 and vice-versa.

For Street photography, both cameras are really good, although the Sony A6000 may offer you a better convenience thanks to its built-in viewfinder, whereas, for Portrait photography, the A6000 may perform a bit better.

For Sports photography, the NX500 outperforms the A6000 thanks to its faster shutter speed, and the number of focus points, although the difference isn’t huge at all. For Daily and Landscape photography, both cameras output nearly the identical performance, hence, once again, the result can be considered as a tie.

On the contrary, the Sony A6000 has a faster continuous shooting speed by 2 fps ( 11 vs 9fps), has an electronic viewfinder, a built-in flash, and a support for UHS-I memory cards.

To conclude, I’d go for the Samsung NX500 because it is versatile and may offer you more advantages over the Sony A6000.