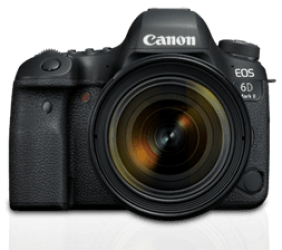 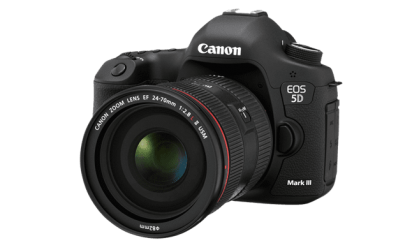 This post may contain affiliate links. If you make a purchase using one of these links it means we may earn a small commission at no extra cost to you. Learn More

As you may already know, DSLRs are the most popular full-frame camera choice. They are being widely used across the world by professional photographers, specifically, full-frame cameras because the have the ability to capture more light, show more detail, and perform better in dimly lit situations. As an example of such cameras, the Canon 6D and the Canon 5D Mark III are the ideal choices for any photography enthusiast.

Starting with the Canon 6D, even though it was introduced 7 years ago, it’s still a top-option for enthusiast photographers who want a high-quality, full-frame camera. During these years, the full-frame DSLR market has grown greatly, obviously, with Nikon and Sony as competitors. However, the 6D has managed to stay on top of the chain when it comes to high-quality shooting at a reasonable price, so it’s a tool perfect for those who want to express themselves through photography.

Although, the Canon 6D lacks some features that some other full-frame DSLR cameras at this price range have, such as the dual card slots and the autofocus system. While these are the 6D’s weakest points, the 5D Mark III is more popular since it has many more features than the 6D. Nonetheless, depending on what your requirements are, and for what purpose you need the camera, what kind of photo shooting, etc, the 6D might still be your ideal option. You’ll see more specifics and details later in this review, where we’ll also make a comparison table for both these cameras.

Okay, but what about the Canon 5D Mark III?

All and all, it is a state-of-the-art tool that has been a favorite among professional photographers, even though it was announced and brought to the market in March 2012. It is the 5D Mark II’s successor, while it comes with a lot more features and in a far more superior body. We will talk about more details later in this review, so make sure you stick with us in the next couple of minutes to find out more information about these cameras. 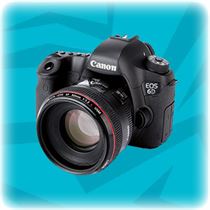 Okay, maybe you’ve heard about it somewhere, or seen it, but the Canon 6D is an excellent full-frame DSLR choice, which basically offers everything a photographer could need, at a fair and reasonable price.

Due to the camera’s relatively small size, we can immediately confirm that this camera is for the enthusiasts or travel photographers. Even though it may lack some features, the 6D still has the most important ones which you will need on a daily bases, such as the wireless control which allows you to upload your images directly to your computer or facebook and so on, without having to buy any extra additions.

To get more into the specifics, the Canon 6D has a 20.2 million pixel full-frame CMOS sensor, which is combined with the Digic 5 processor, and this is really good news because it enables a native sensitivity range of ISO 100-25600. Thus, this ISO range will be great for low light and landscape work, and even more, it can be extended to ISO 50-102400 if necessary.

However, when it comes to AF points, in total there are 11, with only the central one being cross-type. Yes, I know what you’re thinking, the number of AF points is a lot less than most cameras on the market, even a lot less the Canon 7D, which has 19, but you don’t need to worry about that since you will still get exceptional performance. On the other hand, Canon 6D is capable of advanced AF control which enables the user to quickly adjust the tracking sensitivity and the acceleration and deceleration of tracking, which are all useful when shooting moving subjects or something similar.

To continue, this camera features a 4.5 fps shooting rate, which is good, but not enough for some highly demanding users on the market. The screen is 3-inches with 1,040,000-dots, which is similar to most other competitors at this price range, but nonetheless, just as we mentioned in the beginning, the Canon 6D is the first DSLR to feature an in-built Wi-Fi technology, which is rarely found in DSLR at this price range.

There’s something we like most about this camera, out of all the features, pairing the camera and a smartphone is the most useful feature they’ve set in my opinion, and it will take only a couple of minutes to do it. Specifically, this is possible thanks to the Canon EOS Remote App, while after you pair it, you get the option of choosing and selecting the shooting mode that you want and then adjust the settings on the screen of your phone.

For instance, with the manual mode, you will get quick access to aperture, shutter speed, and sensitivity, which you can change and play around with a touch of the relevant option. But by default, the focus button is hidden, which means that you’ll have to switch it through the settings menu, while afterward, the app will suddenly become the wireless solution that you have been looking for.

Moreover, full HD video capture is also possible, but the bad news is that you don’t have the option of a headphone socket from which you can monitor the sound while recording. Overall, the Canon 6D delivers great value for the money, and we highly suggest you take this camera into serious consideration, especially if you’re looking for a reasonably priced full-frame DSLR. 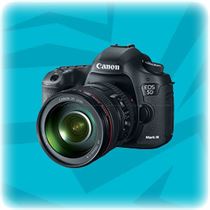 Okay, before we start, let’s just point out that the Canon 5D Mark III has a lot more features than the Canon 6D, however, it does come at a more expensive price. Having 22.3 million effective pixels, this particular camera’s sensor it a real masterpiece.

The 5D Mark III has one Digic 5+ processor which in combination with its eight-channel readout it will allow for continuous shooting at speed of 6fps, pretty impressive right? Just by these facts, you can tell that the 5D Mark III is beating 6D in many areas already.

Also, Canon 5D Mark III introduces the new live view/movie switch on the rear, similar to the Canon EOS 7D, which speeds up the movie activation. For more versatility, you can also find a headphone socket for monitoring the stereo audio, while you can also adjust it, similar to previous Canon models.

What I like most about this camera is that with this DSLR model, you can make HDR recordings, which means that the Canon 5D Mark III is capable of recording and merging three shots to produce a high-dynamic-range image. Despite the popular belief, this is an extremely useful option since you can record all three shots as well as the processed HDR image, and if you shoot raw and JPEG images simultaneously, you’ll end up with a total of seven images, not to forget the raw files that you can process whenever you wish.

Another strong point compared to the Canon 6D is that this particular camera has two card ports, one for compact flash and the other for SD format cards, however, there’s no XQD card port, so don’t get disappointed.

For people who like to take ambient pictures and shoot videos even when it’s raining, they’ll be happy to know that the Mark III has better weatherproofing than many other competitors at this price range, while most aren’t even made for rain.

Moreover, something cool about the design is the finger grip which is covered in a textured rubber-like coating that will help you hold the camera in your grasp safely, and the contours of the front and rear will provide you with exceptional comfort.

Furthermore, on the back of the camera, you’ll find a live view/video switch that is within easy reach of the right thumb, while there are also a couple of extra buttons, such as the button for access to Picture Styles, Multiple Exposure, and the HDR modes.

To finish up, if you have the budget for the Canon 5D Mark III, you should definitely go for it, and as for guideline of the topic, the 5D Mark III definitely beats the Canon 6D in many aspects, including features, performance, and versatility.

If you reached this part of the article, then you should know by now that the Canon 5D Mark III is better than the Canon 6D in many situations, however, it does come at a way more expensive price.

But as we always say, it doesn’t necessarily mean that the Canon 5D Mark III is better than the Canon 6D because it all depends on what you need it, and if photographing is just your hobby or your daily job.

Either way, for a more feature-rich experience, you should go for the Canon 5D Mark III, yes, we know it’s confusing, but you will see the difference yourself if you’ve used other full-frame DSLR cameras before. If you haven’t had your hands on similar cameras before, nothing will help you decide on them, because as we said, both of them are great for their price range.

I am a writer, photographer, videographer and I love cameras. I also love to travel and take landscape pictures on different counties. The world is beautiful, and i love sharing my experiences through photography.