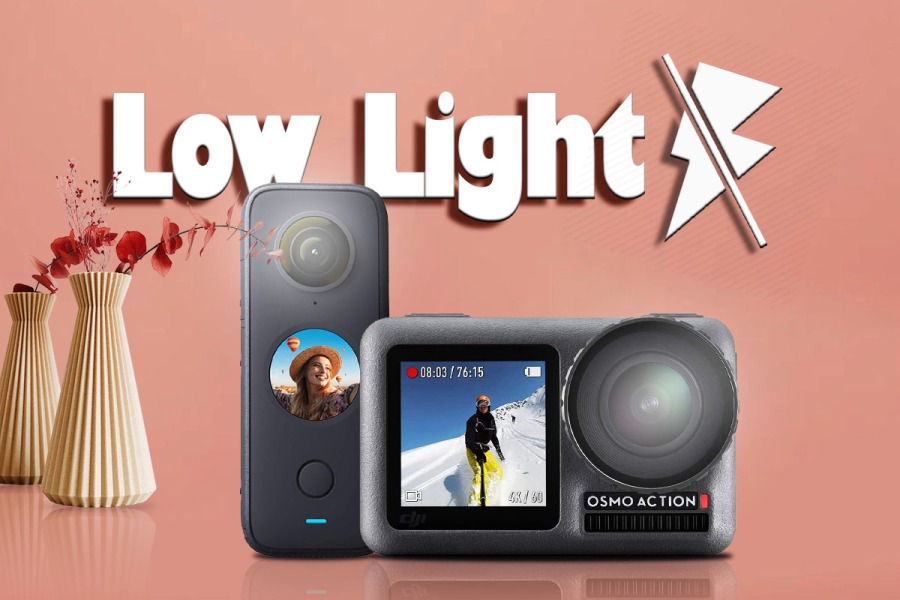 Action cameras are the first thing that comes to our mind when we think of any activity that includes action, right? Well, that’s because action cameras are really great, and as time passes they become more popular.

In this article, you will find the best low-light action camera! I’ve included the top four picks, also I’ve listed what they are good for (besides low light).

Starting this article with a great action camera that works pretty fine during low light. It is the COOAU camera, and as listed, it is one of the best budget picks, of course when compared to the other four cameras, that I will be mentioned below in the article. Right now, let me start with the first one!

As you may already know, action cameras are very small, and COOAU Native is one of them. This camera measures 2.28 x 0.79 x 1.73 inches. Besides being small, this camera is also lightweight as it weighs only 1.23 pounds. It is fully waterproof, and it stands as one of the greatest cameras used underwater.

This COOAU action camera is able to record at 4K and everything is in the clearest way possible. The camera captures 170 degrees of the scene, and it does it in the best way possible.

It has a lot of other recording modes as well. There are included slow motion, fast motion, time-lapse, and many other things. As long as the low-light ability is concerned, this camera works pretty fine, bringing you great videos. Even though they are not perfect, when we consider the price tag, it is good enough to be used.

This amazing camera can stay with you for up to 2 hours when recording in 4K resolution. It is enough somehow but still, if it isn’t enough for you, then you are more than free to take extra batteries with you. 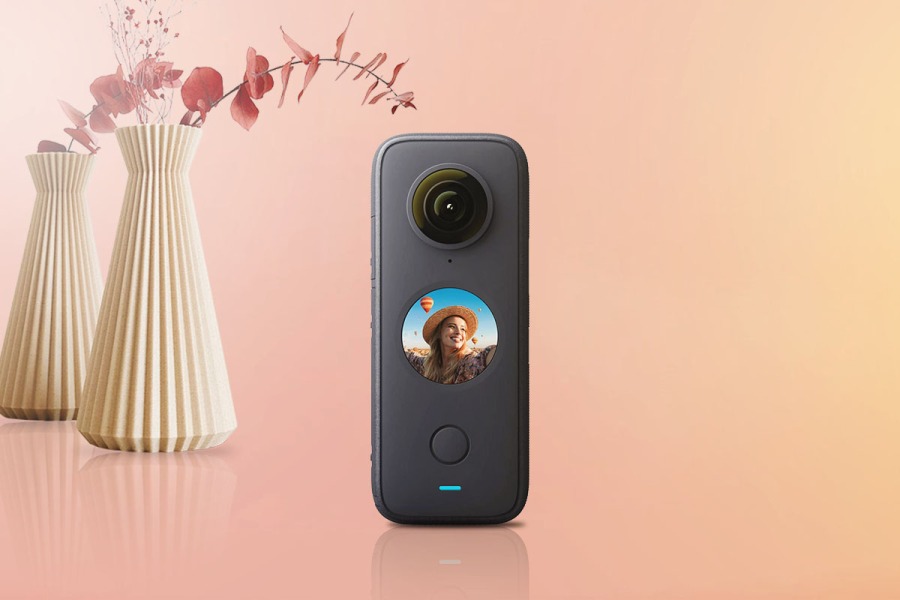 Even though not the most famous of them all, Insta 360 One X2 is one of the most commonly used action cameras by lots of people. It has a normal and somehow affordable price tag, but still, the part where it shines most is the quality of video recordings, just as it is listed.

Based on looks, this camera differs a bit from the action cameras that we are used to seeing because it has a totally different shape. It measures 4.45 x 1.82 x 1.17 inches and it has a weight of 4.9 ounces. Being small, this camera can be used for anything that you need, and it is important to mention that it can be easily used underwater because it has an IPX8 rating.

This camera is one of the best ones used at 360 degrees. It can capture whatever you want, and it brings a whole view of the place that you are.

What would be better than recording at 360 degrees with amazing clarity and quality of videos? Well, just as listed, this camera allows you to record 5.7K videos, which look clearer than you can ever think of! It also allows you to record slow-motion videos, and they come clear enough to be used for anything that is needed.

In order to stabilize your videos, the best thing to do is to use the Steady Cam mode that is found on the settings of the camera. It stabilizes the whole scene if there is any shake that may bring blur to your videos. When in low-light the camera is able to capture great things, and based on the 5.7K resolution, it brings amazing videos.

When it comes to the battery life, this camera is able to perform (a recording) for about 80 minutes once it is fully charged. 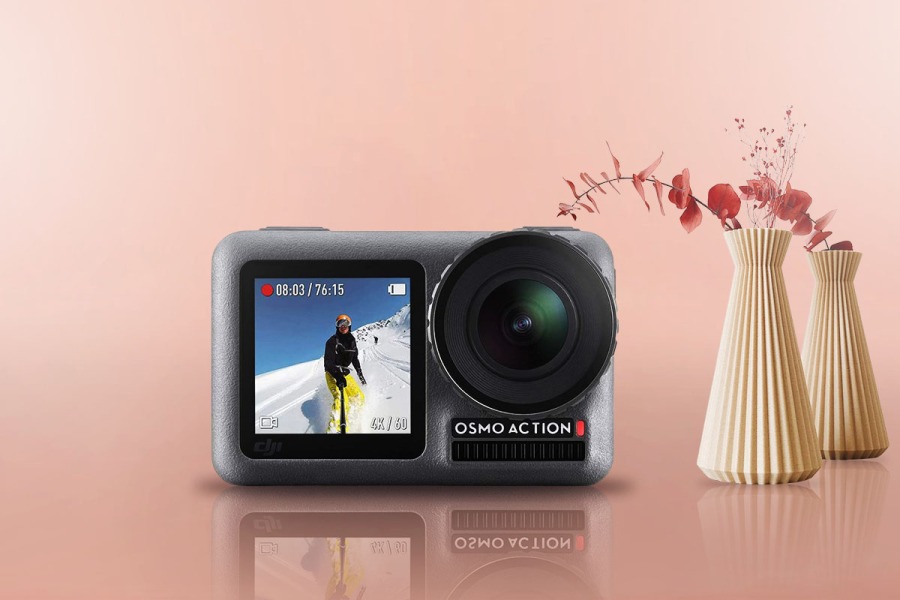 Whenever I have to talk about the DJI Osmo Action camera I mention that DJI Osmo is an amazing brand that dealt with drones mostly, and that’s more than true. They have some of the greatest drones that someone can ever find. Here we deal with an amazing action camera and it is one of the most famous ones all over the world.

This camera measures 2.56 x 1.65 x 1.38 inches and weighs 4.4 ounces. It is known by many people as a wearable camera since you can attach it to your clothes, in different ways. Based on the size and the weight, the camera is fully portable as well. The camera is a durable one and it can resist water and any kind of temperature (high and low). Besides them, the DJI Osmo Action is also dustproof and drop-proof.

This durable action camera features a 1/2.3 inches CMOS sensor. The sensor helps includes 12MP which is related to the recording modes.
The videos, that you can record with this camera, will be captured in 4K HDR. If you don’t know what HDR is, it is in charge of bringing exceptional clarity to the colors. The videos are super clear, and they have a lifelike look. You can record slow-motion and time-lapse videos as well.

You can be in any kind of environment regarding the light and the DJI Osmo Action does a perfect job in any of them. It is powerful enough to work in the darkest places possible. It also owns an amazing image stabilizer, and it is the famous RockSteady technology that fully reduces the blur on pictures or videos.

DJI Osmo says that this action camera can stay with you all day long while shooting short footage, but still when I use it, I bring an extra battery because you never know! 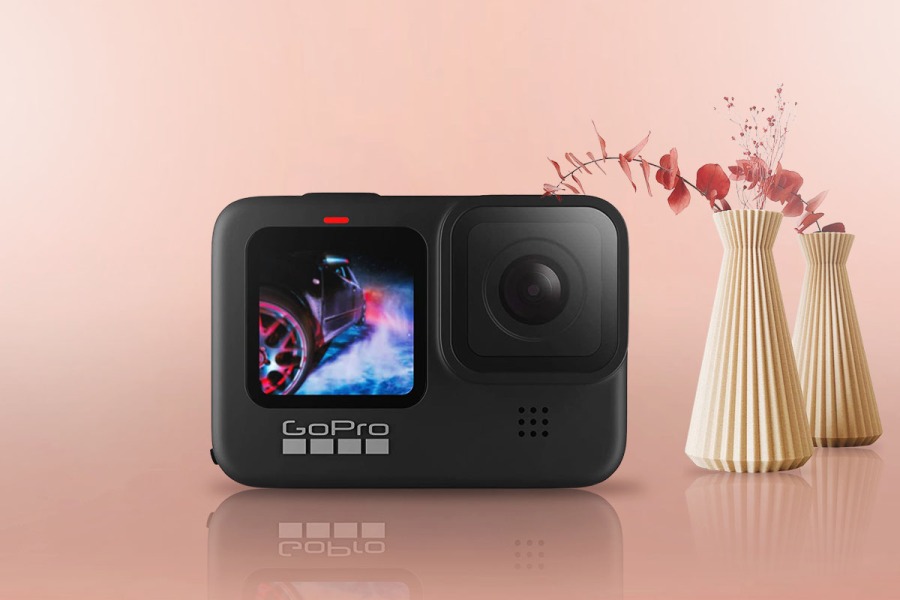 Just like other action cameras, GoPro is a small camera too and it is a definite pocket camera that could accompany you wherever you go. It measures 9.08 x 5.42 x 3.25 inches and it weighs 11.2 ounces. It is fully weather-sealed, meaning that the camera can withstand whatever condition that you may find yourself in.

The sensor that the GoPro Hero 9 owns is 23.0MP 1/2.3 inches big. It is a CMOS sensor, and besides that, the camera also owns a GP1 processor.

The recording has never been easier since this camera allows you to choose between two of the most famous video resolutions, HD (1920 x 1080) and 4K (3840 x 2160). But that’s not everything! You can also record 5K videos (5120 x 2880). Other versions of recordings that this camera has are the slow-motion and the time-lapse feature.

An important thing that deserves to be mentioned is the HyperSmooth 3.0 stabilizer that is added to this camera. It makes the camera usable anytime without getting worried about a shake of any kind. During low-light environments, the camera works more than perfectly. It is indeed amazing.

Since it has three modes of recording, the battery life depends on the one you choose. While shooting at HD it lasts for about 100 minutes and on 5K video shooting, it works for 90 minutes!

For now, it’s definitely the best low light action camera out there.

Action cameras are very good ones, but still, before choosing the best one, especially for low light, you should check out some things within the camera. Here they are: 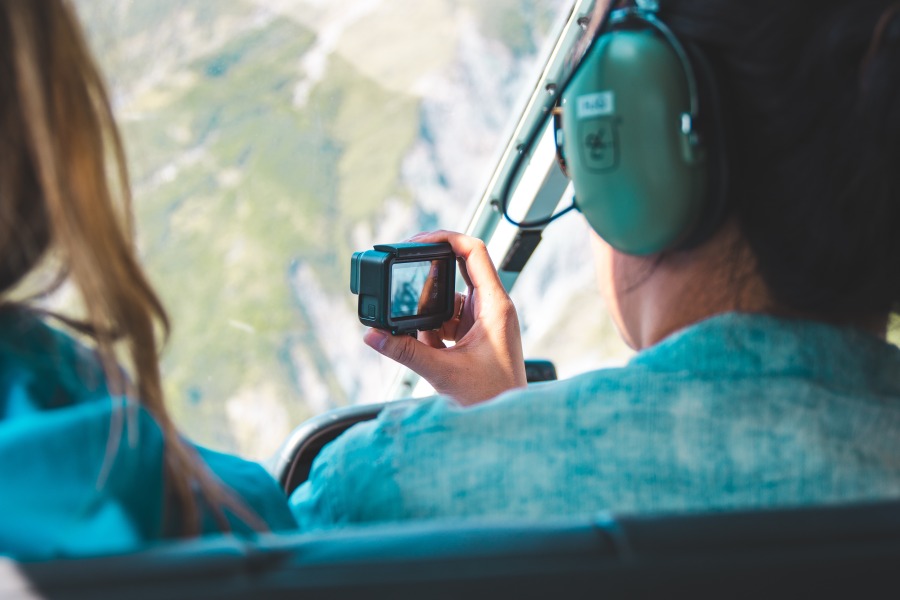 Just as the name of this article implies, we need action cameras for low light, and the first thing that should be noticed on a camera is the ability to perform in that particular light. There are different action cameras all over the market, and some of them own a feature for low light just like the night mode, but mostly you have to adjust it while working with the settings of the camera. The night mode can be found on the newest ones.

Action cameras have smaller sensors than other cameras that we are used to seeing. Well, you should take a look at how big the sensor is because the bigger the sensor, the more light can enter it. That concludes that you should check the sensor and also, the size of the sensor in an action camera.

Quality and quantity are the first things that come to our minds when we talk about anything! Well, here I would like to bring quality over quantity. By quality, in any camera, I obviously mean the picture and video quality.

It is one of the most important things overall.

What if a camera turns off the moment that you are shooting any specific thing? I know how frustrated a photographer can become, and that’s a well-known fact indeed. Always check out how the camera performs regarding the battery life in general so that you can have an idea about it before you purchase any.

While we are here, I would like to let you know that you can check which are the action cameras with the longest battery life of course if your main concern is the battery life of the camera. 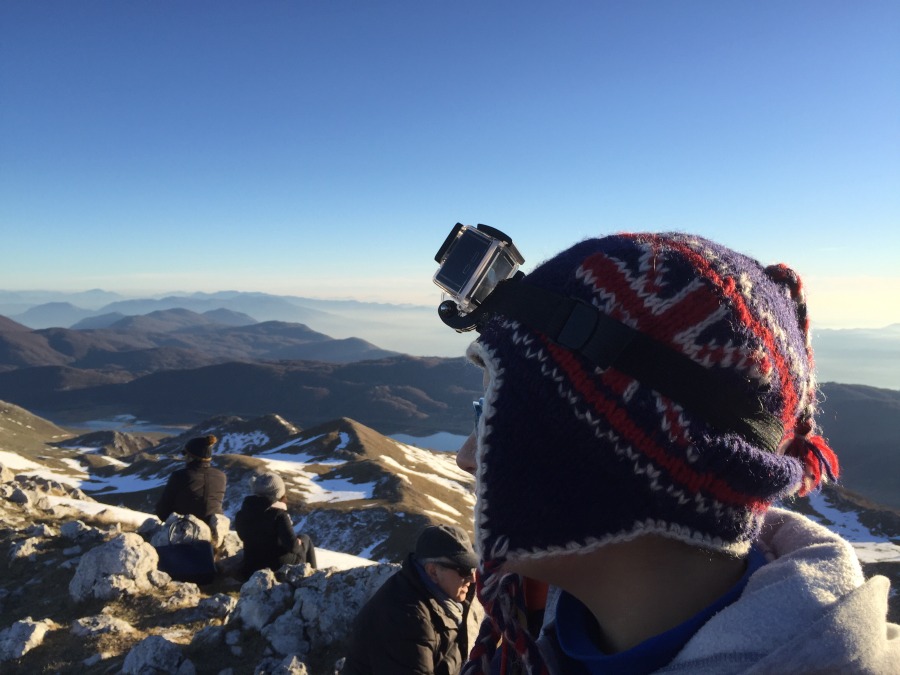 Are action cameras the best ones in low light?

I am a bit sorry to disappoint you but not really. Action cameras are not the best ones for low-light environments, and they are not the first thing you would want to use. However, with the enhancement and the improvement of technology and cameras in general, some cameras have a low-light ability. That makes them usable anywhere at any time.

Is there an explanation why action cameras “suffer” in low light?

The main reason that makes the action cameras fall a little bit behind when it comes to low light conditions is the sensor. As we know, any type of other camera is bigger and has a bigger sensor within. Action cameras are the smallest cameras that you can find, and of course, they own a smaller sensor.

That small sensor is the main reason for the not-so-good low-light ability.

Do action cameras have flashes within?

You cannot find even one action camera that has a built-in flash! Even though flash, in general, is an important feature that would make the camera excellent to be used in low-light places, action cameras don’t have flashes.

Here we are at the end. As you can notice, in the article I added some of the most famous names in the industry of action cameras in general and that’s because they never disappoint.

All the cameras that I mentioned work fine and help you bring amazing things for whatever you are planning to do. I think that listing them what they are best for would help you more and you can now distinguish them.

Anyways, I really hope that this article will help you find the best low-light action camera!

As I mentioned at the beginning of this article, the popularity of action cameras cannot stop growing. However, you should know that action cameras are not only used in low-light environments, there are many purposes on when and how to use them. I would really like to introduce you to the most amazing action cameras used for hunting or if you love motorcycles, you can use some of the greatest action cameras for motovlogging.

Action cameras can be used whenever and for whatever you want! They are some of the greatest launches that are done in the photography field.